Arthur and Gwen Re-Watching Merlin 1x11 - "The Labyrinth Of Gedref"

Helloooo everyone and hope all of you are having a wonderful time.

So, we are nearing the finale, dont we? And i am excited because we will be moving to season very soon and there are soooo many juicy arwen scenes that needs to be discussed. Well, that's laters ... let us talk about the current episode.

The Labyrinth of Gedref is the eleventh episode in the season and i have to say this is an Arthur's episode. We are introduced to Arthur's future kingly skills and i think he surpasses his father here. And Merlin too comes to accept that he is destined for greaters things ahead.

There is a lesson learnt in this episode and finally, this is both an enjoyable and educational episode. So be free to answers the questions based on the new format we have opted for.


YOU CAN DISCUSS ANYTHING YOU PREFER.

Questions to aid you answer this forum

- Discuss why you liked the episode?

- Differentiate the qualities you find in Uther compared to Arthur. Compare and discuss the present king as well as the future king' s abilities to solve the problem

- How Merlin aids Arthur in this trial

- Were you disapointed there wasnt any arwen scene or was the ommision justified because of the seriousness of the matter?

- What do you all know about unicorns?

- Talk what drew you the most to this episode; the plot or the brilliant acting by the cast?

- Were any interesting plot holes?

- With the finale still fresh in our minds, dont you all wish the ending of Arthur's life were reversed just like the unicorns? Here in this episode the unicorn lives because Arthur sacrificed his life for Merlin. And what if Merlin did the same in the finale, won't Arthur still be living with Gwen? Tell me your views? It'd be an interesting topic for discussion.

Have a good weekend everyone.

+I loved the episode cause it was all about Arthur and his making of a great king. What I loved the most is that it started with Arthur making a mistake and then doing everything to make it right. He didn't even realise at first it was the mistake he made. And he wasn't that arrogant and stubborn to not admit the mistake.
I believe that Arthur killed the unicorn because he thought that Uther would be proud of him. As he was. Arthur looked so much up to his father and always tried to do the things he would approve. He wanted so much for Uther to be proud on him. That led his actions in the beginning. Thankfully, as he grew more mature, he became his own man. A better man than Uther never was. The man Uther could never be.

+I believe if Uther was faced with the same challenge he would't passed it. He doesn't have the same qualities as Arthur; he doesn't have the makings of a great king. He rules with his head, not with his heart. He wouldn't admit he was wrong. And he most definitely wouldn't sacrifice himself for a servant! And that is everything Arthur did. That is why he proved to be pure of heart and it is also why he is the Once and future king!

+Merlin was there by Arthur's side all the way, as he should have been. He gave the right advices but Arthur wouldn't listen. He usually didn't listen. I loooved Merlin in this episode. I wish he was wise as here in every episode.

+I am always a bit disappointed when there aren't any Arwen scenes, but considering it was still season 1 and they haven't started any kind of a relationship ( apart from the few crucial moments discussed before), I think it was appropriate. Though if this happened later, I am sure they would be ( or there should be) a sweet Arwen scene where Gwen gives Arthur back his confidence.

+Ohh I absolutely love unicorns!! I do not know much though about them, I must admit. But I always saw them as beautiful mystical creatures. They belong to a world of magic, a world of dreams, where everything is possible. They always looked so pure and innocent. And did I say beautiful? ^^

+Merlin and Arthur's acting was great as always! They showed the true bromance and not just the banter. They showed they were ready to give a life one for another.
Arthur was amazing. He was so flawed! One mistake by another! But he showed how he truly cares for his people and he was ready to do absolutely everything it takes.
I also liked the plot. It was interesting and unusual. And it had unicorn!! I wish it was showed in more episodes.
Anhora was interesting as well. Though I didn't like him very much. Maybe it was the actor but the role wasn't much either. He was meaningless, at least for me. I know he was there to give Arthur the memos, but still...

- With the finale still fresh in our minds, dont you all wish the ending of Arthur's life were reversed just like the unicorns? Here in this episode the unicorn lives because Arthur sacrificed his life for Merlin. And what if Merlin did the same in the finale, won't Arthur still be living with Gwen? Tell me your views? It'd be an interesting topic for discussion.
+Now this is interesting. See, whenever I think how Merlin could have saved Arthur in the finale, i think how he could have called the dragon sooner, how he could have used the Cup of life!, how he saved could use his magic, i mean he was supposed to be the great warlock of all! So Arthur dying was sooooo stupid and shouldn't have happened. Even more so, in this topic, cause he fought for Camelot, for freedom and he gave his life for that cause. He sacrificed himself for a greater cause. And sooo many of his knights sacrificed themselves for Arthur. So, that alone should be a reason for Arthur to live. And Merlin; I believe if that was what he had to do, then that is what he would have done. To give his life, his magic being, for Arthur to live. I think it would be a nice plot twist.

My favorite quotes:
Arthur: I had no idea you were so keen to die for me.
Merlin: Trust me, I can hardly believe it myself.
Arthur: I'm glad you're here, Merlin.

Merlin: They do say rats are very intelligent.
Arthur: More intelligent than you, it would seem.

Merlin: Where did you get the water to make the tea?
Gaius: Fortunately, for both of us, you forgot to empty your bath yesterday.

Uther: Give the order to stop distributing food to the people. Is that understood?
Arthur: (after a pause) You will have to give that order yourself.

Anhora: A unicorn is pure of heart. If you kill one, you must make amends by proving that you also are pure of heart. Arthur was willing to sacrifice his life to save yours. He has proven what is truly in his heart. 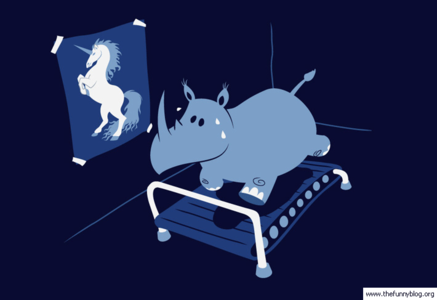 HumbleQueen commented…
Cute image, Joppa. About Merlin sacrificing himself, there is no way in tarnation they would have done THAT. That would have left just Gwen for Arthur and some fans would have started a rebellion. sa loob ng isang taon na ang nakalipas

Always something. I won't even bother to explain. See you guys next week and maybe I can catch up as I haven't watched this yet. I apologize, Shu. Kisses to all.

sa loob ng isang taon na ang nakalipas HumbleQueen said…
Finally watched. I liked this episode for the most part, except for the rat soup. :) We started to see the real Arthur come through loud and clear. For me, I remember when first seeing it that I was totally taken by the shared affection between Arthur and Merlin. At this point I liked how totally committed Merlin was. Now, looking again, that scene after Arthur drank the cup, brought me to mind of the series finale. I mean the way Merlin was abut it.

It wasn't a favorite for me, but I did like it and enjoyed watching. Little of the girls here. Episode 10 spoiled me and I missed them.

I didn't mind the lack of Arwen. It definitely wouldn't have been appropriate IMO. The purpose of this episode was to contrast Uther and Arthur and to showcase the Arthur/Merlin relationship. It accomplished its purpose. I didn't mind, but I do prefer having more interaction with the boys and girls.

To answer your question, Shu, yes I do wish the series ending could have been that something could have been done which would have been similar to save Arthur, but I'm not too keen on Merlin sacrificing his life. I just wish they'd done something. I'm still not at all okay with the way they ended this thing, particularly for the queen.

But it's done. So I'm trying to not think too much about it.

HumbleQueen commented…
Oh and I wanted to say that the pagganap was really good, but I think they all got better as the ipakita progressed.. sa loob ng isang taon na ang nakalipas

sportyshuie commented…
Guys ... I am so sorry. I'm still working full ugoy this week and haven't found the time to watch or comment yet. Will do soon I'm done with my work. sa loob ng isang taon na ang nakalipas

MISAforever commented…
Don't worry dear. Take your time! sa loob ng isang taon na ang nakalipas
Something to say? Sign in with one of these options:
Log in to Fanpop! Not yet registered? Create a new Fanpop account!