sa loob ng isang taon na ang nakalipas HumbleQueen said…
Again, I was happy that my turn brought me to a favorite episode. In fact, I’d say for me this ranks way up at the top with a selected few from the five year run. It has a little adventure, but most of all I remember it for its poignancy. I see all the characters developing and showing their true colors, except perhaps for Morgana, who had more of a back seat in this one. But she did get more settled in regarding her future with yet another dream. Merlin was front and center in this one. Even though the plot line was the salvation of Arthur, it is Merlin through whose life and eyes it all unfolded for us. We were with him, and felt for him, like we have never before, even including episode 10, IMO.

So once again following Millie’s format, here goes. Use the following two headings when you comment:

What I liked about this episode:

Feel free to discuss anything you want under each heading. You can talk about any plot holes or things that could have been added to improve the episode.

Some questions to ask yourself to help you answer the headings...

+What was the main “dilemma” or plot in this story? How did the “villain” fit into this and the outcome?
+Do you have a favorite moment that brought you into the story in a particular way? A moment that grabbed you somehow and made you identify with the happenings of the story and/or warmed your heart to the character(s).

+Even though Arthur spent a huge part of this episode in a comatose state and in some ways, out of our focus, what did he do that set the whole plot in motion, but once again gave us a glimpse of his courage, loyalty, and selflessness? It happened in the cave when the beast appeared and it’s the reason for the whole story.


+I was involved in a long discussion once about this on the TVdotcom A/G thread and there was a lot of disagreement: How do you read the Arwen scene where Gwen was talking to the “unconscious” Arthur? How do you read her actions? Was there romance involved here or not? In what way do you think her actions had anything to do with his survival? Note her words that she didn’t say “please don’t die so that you can be king” but “you are NOT going to die, Arthur...because I know that one day you will be king” said positively.

+Do you think there’s any significance to the fact that immediately after Uther and Arthur’s conversation about him having a guardian angel that Gwen walked in? Or should we only think of Merlin here? Any thoughts on the Arwen scene after his recovery?

+Colin’s performance when Merlin’s mother became ill was top notch. Any thoughts about what Merlin intended to do?


+Any thoughts about Gaius and what he did? What did you think of the battle of the “witches” in the end? Weird. Wonder why Merlin wasn’t shown to be consistent with that kind of power. I wasn’t crazy about it because them were made to be like gods. So I’m not sorry we didn’t see a lot of that.

As always, talk about anything else your little heart desires. So many memorable scenes here, such as the one where Uther was walking holding the lifeless Arthur. What a performance by Anthony! Also, the music then and throughout was done exceptionally well. Loved the music in the Arwen bedside scene. So lovely and so well done; beautiful backdrop to Angel’s wonderful touching performance there.

ellarose88 commented…
God I have so many episodes to catch up on re-watching! And I keep saying every week I will. But I will this week catch up because you have really excellent tanong here about this episode. So well done! sa loob ng isang taon na ang nakalipas

HumbleQueen commented…
Believe me, Millie, I know. You'll get to it. Just jump back in like I'm trying to do. sa loob ng isang taon na ang nakalipas
Show 2 more comments…

sportyshuie commented…
Nanna, I'm so sorry I missed two episode. Need to catch up. Great episode. But above all, I like to congratulate all involved for making this rewatch a success. I would call it a success because we did it and I loved every bit of it. Now, for season two. sa loob ng isang taon na ang nakalipas

ellarose88 commented…
LOL I have so many episodes to catch up on its crazy! But I want to do it before we start series two. Which brings me to some questions. But I'll pm you and Shu... sa loob ng isang taon na ang nakalipas

sa loob ng isang taon na ang nakalipas MISAforever said…
+I loved this episode cause it had so much in it. The Questing Beast who was in the first plan in the beginning, dying Arthur and finally Nimueh! I think it was all well balanced and the actors were amazing, so I say it was a perfect closure for the first season. I didn't like how somehow everyone was being or trying to be sacrificed at some point. Too much drama...


+A favorite moment that brought me into the storyline... Hmm, that would have been the Arwen moment. But about that a little later. The one I also loved was when Merlin came over at Arthur's to say goodbye. You could see how he totally cares for him and his benefit. That he's trying to help him become a better person and that through this season they have developed a strong bromance. It was really nice to see that. Also, when Morgana ran down the stairs to stop Arthur from going because she thought he was going to die. I always saw their relationship as fraternal, and to see her care like that, especially now when we all know what happens later, it was refreshing and quite pleasant.


+I saw Arthur's courage, loyalty, and selflessness was obvious when the beast appeared and he fought it by himself. He "took a bullet" for his friend and fellow knights, and that is something he used to do quite a lot. It is just one of the things he did and one of the things why I so much adore him. It a rare quality in a person and it is admirable for someone to have that level of loyalty.


+Uther was being a worried father and yet remained a ruthless king. ASH was amazing. He couldn't watch his son die and yet he wouldn't use magic. Like he did later with Morgana. I loved how he was tender with him. Through all the seasons, I missed seeing more of that side of Uther.

+Arwen scene where Gwen was talking to the “unconscious” Arthur:
Romance involved, I'd say yes and no. At least not in a conscious way. I think since Ealdor they both saw each other in a different way, but they couldn't admit it to themselves. So now, when he's dying, she's slowly allowing herself to admit that he is a great person whom she cares about. Maybe it is because he brings her hope in a better tomorrow and she seems a brighter future for them all; maybe it because he has the most beautiful blue eyes; I don't think she know at the point. All she knows is that he must not die, that is not an option and she is not giving him that option. He must live, for her and for Camelot.
(Gwen: You're not going to die, Arthur. I'm telling you. Because I know that one day, you will be king. A greater king than your father could ever be. It's what keeps me going. You are going to live to be the man I've seen inside you, Arthur. I can see a Camelot that is fair and just. I can see a king the people will love and be proud to call their sovereign. For the love of Camelot, you have to live.)
When Arthur wakes up he remember her talking to him. He remember her words and he liked them. You can see clearly on him he is all smug. He's teasing her. It was so cute and on another level. They've slowly started to develop the most amazing and incredible love story, ever!
(Arthur: Never lost faith.
Gwen: I was just talking.
Arthur: Tell me again what you said.
Gwen: I don't remember.
Arthur: Yes, you do.
Gwen: No, I don't.
Arthur: Come on. Something about 'the man I am inside'.
Gwen: No. I never said that.)


+Immediately after Uther and Arthur’s conversation about him having a guardian angel, Gwen walked in. I never look at that from this point of view, but now when I think of it, I see the significance. Merlin was always there for Arthur and saving him, in a psychical way. But Gwen was there for him emotionally. She was his rock. He could not live or function without her; he could never be the king he was destined to be. So yes, Gwen is his guarding angel. It is a fact!


+Merlin and Hunith. He acted as any son would have done. Or at least most of the sons. He just could not watch his mother die, especially because he blamed himself. I understand that action and I approve it. Maybe it was not the most reasonable decision, as he had great destiny upon him, but when heart speaks you cannot deny it.


+The battle of "witches". I like that name. And I agree, we should have seen more of that! They were battling with a power of life and death. And Merlin tricked Nimueh. He won. But one thing I never understand is, why on Earth he didn't take the Cup of Life with him!! I know later he said he thought it was destroyed but in that scene you can see it is clearly unharmed. And also why didn't he use the Cup to save Arthur's life??? So, even though he won this battle and had such great potential power , he lost. Because he didn't know how to use it! Because he didn't use it. 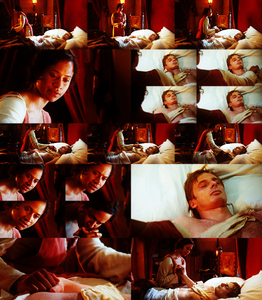 HumbleQueen commented…
Good point, Joppa. Why didn't he take the cup of life with him? At any rate, I sure do like all your answers. Very thorough and insightful. Can't wait to hear all our perspectives on Season Two sa loob ng isang taon na ang nakalipas

MISAforever commented…
Me too!! I know it's hard to catch up on this, but it's really fun.. And it helps with the pain I still feel.. sa loob ng isang taon na ang nakalipas

sa loob ng isang taon na ang nakalipas Arina0122 said…
Ladies, I have been so busy. So far behind and you all understand the real world taking over our fun time. Just want to say keep up the good work. Enjoying what I read.

HumbleQueen commented…
And the real world has really been something this week. I'm glued to the tv right now watching Boston. Thanks for checking in. sa loob ng isang taon na ang nakalipas
Something to say? Sign in with one of these options:
Log in to Fanpop! Not yet registered? Create a new Fanpop account!