+ Do you think that Arthur trusted Cedric too quickly and was wrong not to trust Merlin after the loyalty he has shown Arthur the past year?

+ Any plot holes? Like why does it seem really easy for people to take Arthur's keys and steal precious artifacts?

+ Do you think that there was any interaction between Arthur and Gwen during the time between series 1 and 2? What did you think of their first scenes together in this episode?

+ What did you think of Arthur/Merlin's friendship throughout the episode?

MISAforever commented…
Me too!!! :D I'll do it in a few days! sa loob ng isang taon na ang nakalipas

MISAforever commented…
I was really planning to do this today but I am sooo exhausted I'm barely keeping my eyes open. But I'm taking a araw off ( to study) tomorrow, so I'll do it then!! sa loob ng isang taon na ang nakalipas

sa loob ng isang taon na ang nakalipas HumbleQueen said…
I want to apologize. I haven't been feeling well for a few days...Hip pain, etc. but I'm trying to watch it tonight. Hope I can respond tomorrow; at least partially. I already know the best moment for me. And maybe the worst. See you soon hopefully.

sa loob ng isang taon na ang nakalipas HumbleQueen said…
Finally, I have something to say about this episode which I thoroughly enjoyed.

+ Best moment(s):
Of course my favorite moment was Arwen. It was when we for sure and certain see a gleam in the prince’s eye for this little servant girl. After she saves his life (twice!) and falls on top of him (LOL) and they walk inside to treat his wounds, then we have it. That’s why I don’t get the complaint about episode 2 being so sudden with the romance. After the scene in 1x10, and then 1x13, and then this, I don’t get it. It was made clear in this episode that he was totally smitten, but nothing had been said yet, nothing had transpired. Just the phase when two people are aware of each other.

+ Worst moment(s):
When Merlin was in the stable with horse dung on his face and how Arthur ridiculed him.

+ Your thoughts on the villain of the week:
Actually, I thought he was pretty funny, especially in the woods when he was so scared of that monster creature. Then he cleverly turned it around and grabbed the moment. He wasn’t particularly scary IMO. He really worked the Merlin thing, but to me he was amusing. I wasn’t upset with him as much as with Arthur.

+ Your thoughts on the plot progression and conclusion:
I thought the thing with Merlin and Cedric at the end was confusing. I didn't get it. What exactly did the Great Dragon tell Merlin to do and what did he actually do with Cedric there and what happened with those birds. I guess they all died but for me it was dumb. And Merlin and Gaius smiling at the end with all those dead bodies around turned me off. And what in the world did Arthur call himself doing and once again, he was conveniently knocked out. In other words, the conclusion left something to be desired for me but I did enjoy it all in all.

+ Do you think that Arthur trusted Cedric too quickly and was wrong not to trust Merlin after the loyalty he has shown Arthur the past year?
Of course I think that! It was so bad as to be totally unrealistic. No one would have trusted anyone that quickly and turned on the person they knew as abruptly as that. I thought it was very poor writing at its worst.

+ Any plot holes? Like why does it seem really easy for people to take Arthur's keys and steal precious artifacts?
I know, right? That’s just too ridiculous. Plot hole indeed.

+ Do you think that there was any interaction between Arthur and Gwen during the time between series 1 and 2? What did you think of their first scenes together in this episode?
I’m sure after the bedside events in the finale of Season 1 we are to imagine there was quite a lot of looking between the two, blushing, that sort of thing. No real interaction because of the scene I talked about above.

+ What did you think of Arthur/Merlin's friendship throughout the episode?
Horrible. Just horrible on the part of Arthur. I have no words. This was him misusing Merlin at its worst of the whole series.

I really enjoyed watching this. I was lying on my back in pain watching on my Kindle Fire, and it cheered me up a lot. I did a lot of laughing, even though I felt really sorry for Merlin. Uther didn't even make me angry in this one and there was little Morgana, which was fine with me.

Best moment(s):
- Arwen. Yup, nothing else works for me in this episode because frankly speaking i was expecting something here. After that expectation they stirred in season 1, i really wanted a progress and we got one. I have to thank the gargoyle for this ... LOL!

Worst moment(s):
- Each time Arthur ridicules Merlin. Yes, i hated it. I love Merlin and after all he had done for Arthur, he still doesnt get appreciated. It sucked to watch.

Your thoughts on the villain of the week:
- Suits the storyline. I liked him from Pirates of the Carribean and it was a freshing change to see him in Merlin. Funny and at the same time, cunning, he was good.

Your thoughts on the plot progression and conclusion:
- I agree with Nanna ... i think it was rushed. I dont see the logic behind the great dragon's power to Merlin, the return of Cornelius Sigan is supposed to be a great thing but it fell flat just like the gargoyles, then Morgana's dream had no connection at all except for the crow, and Uther once again hiding inside his castle like a coward sending his son to battle, Merlin and sigan's battle is cartoonish ... clueless.
The only thing that made sense was arwen ... thank god for that.

sa loob ng isang taon na ang nakalipas MISAforever said…
+Best moment:
Arthur and Guinevere scene. Slow progress from where they stopped in season 1. There was no big moment, no overwhelming statement, but simply them. And they were amazing! They started to see each other differently. They were so sweet and adorable and still unaware of what they were beginning to feel.

+ Worst moment:
I agree with both of you. I hated when Arthur disrespected Merlin, even though they tried to make it funny, and in the start it was. But when I looked deeper in that relationship, being disrespectful was something they had to exceeded by then. I also didn't like how Arthur trusted Cedric too easily. He always had a trust issues: not trusted those he should and trusted those he shouldn't. And in the beginning of season 1 that could be forgiven. But that was a massive flaw through all show. I ain't forgiving that!

Arthur: There are people trapped on the drawbridge. I'm not leaving them to die.
Uther: It's suicide!
Arthur: It's my duty to Camelot, and to myself.

Merlin: I just want Arthur to trust me. And to see me for who I really am.
Gaius: One day he will.
Merlin: When? Everything I do is for him and he just thinks I'm an idiot.

+ Your thoughts on the villain of the week:
I didn't like him. Not at all. But not because of the actor, but probably because I have a problem with people who prosper not caring about the other among them. Though I'll admit he was funny. But to me it was more "tragically" funny. I felt really bad for Merlin.

+ Best character development:
I'd say Arthur because he stood up to Uther and showed once more just how much he cared about his people. But the clotpole he was to Merlin though all the episode, nope, I cannot get pass that.
So maybe Gwen, cause she showed the other, more courageous side of her.

+ Best duo development:
Arthur and Guinevere. Because it takes one small scene like that to make them blossom! That is how good they are!

+ Your thoughts on the plot progression and conclusion:
I agree with both of you, again. They started good, but the end seemed rushed. To win against someone so powerful that easy was, well stupid!


+ Do you think that Arthur trusted Cedric too quickly and was wrong not to trust Merlin after the loyalty he has shown Arthur the past year?
I already answered this, but here it goes again. Hell yes!! I think a prince should not trust anyone like that, especially not someone who he met for the first time. I also think that it was unrealistic that someone can come into a contact with royality just like that. And also be granted a position as a royal servant served on a plate. That that was massive plot hole! Also Arthur and Merlin have bonded a lot in season 1 and I don't think they should start a new season like this, a complete direspect and distrust.

+ Any plot holes? Like why does it seem really easy for people to take Arthur's keys and steal precious artifacts?
The one I mentioned above! It was simply ridiculous.

+ Do you think that there was any interaction between Arthur and Gwen during the time between series 1 and 2? What did you think of their first scenes together in this episode?
I don't believe they started hanging around, but ever since Eldor there has been a change in the dynamics of their relationship. She wasn't just another servant to him and she saw he had a good heart. And that was enough by that point. I loved the slow progress.

+ What did you think of Arthur/Merlin's friendship throughout the episode?
I didn't like it. I wouldn't even call it friendship. And it was that. Arthur should have trusted him so much more. But it wasn't just trust, it was the whole behaviour towards Merlin. It really annoyed me. But if Arthur had actually learnt something, it might have been worth it. But as the show progressed he did the same thing over and over again. And that was disrespectful towards Arthur's character. 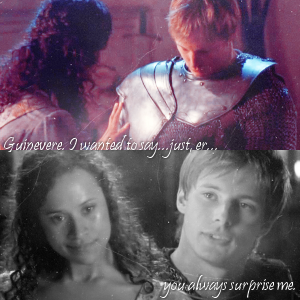