Despite being gross, I actually enjoyed this episode because of one person Catrina. She simply was awesome and beautifully hideous!! Hahaha ... Anyway, we have a small arwen treat here which made me smile wide like the Cheshire Cat .. and i have to say for a moment, i hated Sir Leon! you will all understand why ... LOL!

Here are the questions/headings and suggestions for discussions:

+ Discuss the small Arwen treat in this episode?

+ What do you think of Arthur / Bradley's acting in this episode especially in the throne room where he learns he is no longer Uther's heir? You can also refer to other scenes.

+ Your reaction to the brief love scene between Uther and the troll; (yuks!!) was it necessary? Discuss your thoughts ..

+ Feel free to include anything you want ... but importantly, have fun watching.

sa loob ng isang taon na ang nakalipas MISAforever said…
+ Best moment(s):
Oh there were few. Arwen scene for one, Arthur helping Merlin and refusing to follow Uther's orders when he felt in his heart that he was wrong. I think this was a big episode for Arthur as we saw him as more mature and better man he was destined to become.


+ Worst moment(s):
Uther and the troll in the bed. I mean we saw that and none Arwen in season 5, makes me hate that scene even more! Also there were many disgusting moments with troll's "food" but I wouldn't count them as the worst moments. They served its purpose.

+ Favourite quote(s):
Uther: Because we rule the people, not the other way round.
Arthur: I think you're wrong.
Uther: I beg your pardon?
Arthur: I said you're wrong. Without the people, there is no Camelot. We're as much their servant as they are ours.

Arthur: Maybe he's right. One day I will be the King of Camelot. I cannot be a friend to the people as well as their ruler.
Gwen: That's not true and you'll prove it when you become King. You've a kind heart, Arthur. Don't ever change. Not for anyone.

Arthur: You've always taught me to be true to my heart and that's all I've ever tried to do. To be the man you wanted me to be, someone you were proud to call your son.


+ Your thoughts on the villain of the week:
The same as last week. I liked her better as a troll than a lady.

+ Best character development:
Arthur for sure!! Once more he showed his true nature, that he cares the most about his people, not the power. He stood up to Uther and that was a big deal. He defended his friend and helped him escape. And in the end, he put his life in risk to help his father and the kingdom. So I say, this was huge step foward for him. And of course, there was Gwen, who was there for him to give him hope and courage when he needed it.

+ Best duo development:
I don't know. I don't think there was any. If there were any, they are connected with Arthur and his development as a character.

+ Your thoughts on the plot progression and conclusion:
I liked it better than the first part. There were more things going on. More people that were aware of what was really going on. And I loved the end, cause I've always loved when they showed more of Arthur/Uther's relationship.

+ Discuss the small Arwen treat in this episode?
As I already said, Arthur did the right thing but didn't have his father's approval, so he doubted himself. Gwen was there to encourage him, be his support that he needed. She was also so proud of him and wanted him to know that. It was a small scene but such a sweet one. Appropriate for the early stage of their relationship.

+ What do you think of Arthur / Bradley's acting in this episode especially in the throne room where he learns he is no longer Uther's heir? You can also refer to other scenes.
Bradley was brilliant through all episode. He was so hurt and didn't understand his father's actions. You could see his emotions on his face. The disbelief, sadness, disappointment, confusion. I loved it!! Then he spoke from the heart, and I think that for a second Uther actually heard him but the magic was too strong.

+ Plots holes (any?)
Well, the king married the troll and no one suspected or did anything, apart from Merlin and Gauis. I thought that was a bit stupid. I mean, I expected them all to figure out what was going on and proclaim the king unfit to rule or something. And all they did was dine with them..

+ Your reaction to the brief love scene between Uther and the troll; (yuks!!) was it necessary? Discuss your thoughts ..
Well, it served the comedy of the moment. I don't know if it was necessary or not. Maybe a year ago, I would say it was. But now, knowing what they did to Arwen in season 5.... I don't know.. I could write all day about it... 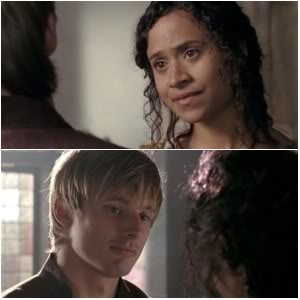