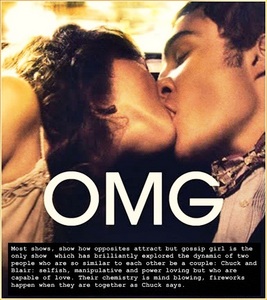 'So the next time you forget, you're Blair Waldorf, remember I'm Chuck Bass and i love you.'
Chuck and Blair are perfection. Though I know and want Chuck and Blair to be endgame, the series needed something to please and surprise all the viewers. They chose to give us some Blair and Dan action. I am going to write my thoughts on Dan and Blair, the new baby daddy revealed, and why Chuck and Blair are the ultimate end couple.

The shows viewers all need what they want. This might make you think “Yes, Chair has the most fans’. That is completely true, but the producers did want something to spice up the ipakita with something we thought would never happen; Dan & Blair. Pleasing everyone does not supposedly mean Chuck and Blair. We have all watched a lot of drama with Chuck and Blair as a couple, and you can just tell, they are meant to be. But allowing Dan & Blair scenes, gives their fans a go. I personally think Dan & Blair are cute, and I have always wanted them to be friends, but my puso will always go towards Chuck and Blair no matter what. Think of Dan & Blair as just a fling, a fling that will give everyone in the tagahanga base what we all want before the series finishes. Just like, we have practically had all the pairings together in a particular way on the ipakita except for Serena and Chuck of course. But they will not happen, because Serena would never betray her best friend even if Chuck & Blair were not together, and she has a few other guys on her mind than Chuck. We have already had, Chuck and Jenny, Chuck and Vanessa, Vanessa and Dan, Vanessa and Nate, Nate and Blair, Nate and Serena, Dan and Serena, Jenny and Nate, and now we have had Dan and Blair. Think of it this way, Chuck and Blair have not really had many threats, it has mainly been their own problems that stop them from being together. So now that the vibe is high for Dan & Blair, and unlike Chuck and Jenny, their tagahanga base has madami fans, and is madami likely to be put together than Chuck and Jenny, Chuck and Blair fans get madami threatened than they really should. Dan and Blair have shared one kiss, nothing more. That is all there will ever be, because he is Dan, and she is Blair, nothing can happen. It is near the end of the series, it is just another flame lit to put Chair fans on the edge. After all, if there was only Chuck and Blair, the producers would think fans would have thought it would be inevitable that they are endgame. They ARE endgame though, and every Chuck and Blair tagahanga should think that, because do you actually think the most loved epic couple, Chuck and Blair are going to separate and go their separate ways at the end? No. Keep faith, they will pull through. If that does not encourage you, remember that if Dan were to be with Blair, who would be with Chuck? It would only leave him with Vanessa or being left single, it would not work out, and it definitely will not leave him with a happy ending at the end of the series, and get what he really deserves. 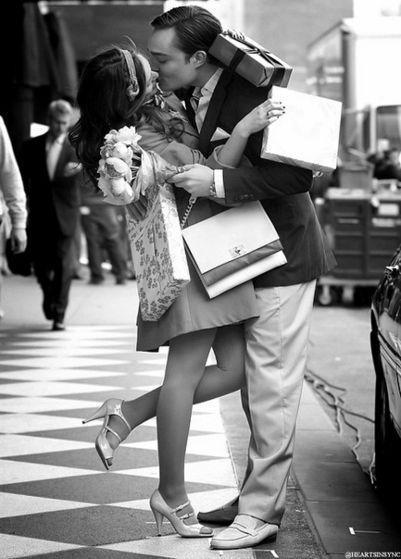 'Something this beautiful deserves to be seen on someone worthy of its beauty.'

Another matter Chuck and Blair fans worry about is Blair’s baby whom she revealed is Louis’s. Do you truly think the baby is Louis’s? A guest star, who has barely made any connection with the fans, who hasn’t even tried to convert us all to ship Louis and Blair together as a couple. I really found it quite frustrating at first, thinking the baby had to be Chuck’s, and then Blair letting all the Chuck and Blair fans down sa pamamagitan ng saying it is Louis’s. I have really thought about it, and Blair’s baby daddy has to be Chuck. Blair is engaged to Louis, and he is a Prince. His mother never really approved of Blair at the beginning, and admitting it is Chuck’s baby while she is engaged, will not make a great impression, a matter of fact, they would presumably break it off as soon as possible. I guess Blair is really scared that if she admits it is Chuck’s baby, she will lose her fairy-tale, and might get hurt from the one man that she loves the most in the world. People think that it is not Chuck’s, but it HAS to be. Who would want Blair to have a baby with a guest star? No one. I can admit, maybe Dan and Blair fans… but they are too deluded at the moment thinking it is Dan’s baby. If any Chuck and Blair shippers believe that, they should no longer, because it is nonsense. I am so absolutely sure that it is Chuck’s baby, it is a typical Blair ilipat to hide it. But I know that if it is not Chuck’s baby, there would definitely be a miscarriage somewhere along the season. I think Chuck and Blair fans need to stay calm, because all of this will lead to a happy ending for Chuck and Blair.

‘If two people were meant to be together,eventually they'll find their way back’. Has anyone forgotten about this? You should not; this message is giving us our answer we want to know. They WILL find their way back, because the fans, characters, and even the producers who are trying to mess this season up for Chuck and Blair, believe they are meant to be. The ipakita is giving Chuck and Blair so many obstacles to go through this season to prove that they truly are the epic couple from the very beginning that deserve and still want each other. I do not know about you, but all I can hear when Blair talks to Serena is, ‘Chuck this, Chuck that’. Blair cannot take her mind off him, and if she were to be with anyone else, she would not be happy. It is as if she craves for him, and anyone else will not do. They put the prince in the situation to mix things up. But can you honestly say she is happy and would do anything for him? This is her fairy-tale, and this is why a part of her MAKES her pag-ibig the Prince, well, because he is a Prince. Not because she loves his personality, or thinks he looks handsome. it is the thought that he is the Prince. I clearly remember she was not even a little interested in him when she found out he was the ‘car driver’ at the beginning of season 4. Her fairy-tale has come true, but she is not satisfied! Chuck is her prince, and she knows it in her heart, because no matter what happens, she is never going to get over Chuck, even when she does get married to the prince. Sure, it is fine to hide it, but that just proves, not even a prince can make her as happy as she can be. Blair goes along with all this, and that is what the Gossip Girl producers obviously want; to keep Chuck and Blair separated, this also includes the Dan and Blair situation. It’s not like Blair has ever really talked about Dan, but it is another small obstacle course to leave Chuck and Blair apart. At the end, Blair is going to be faced with a decision, she is going to choose the one she truly loves, and has always loved. Do you think that she will choose Dan or Louis? No. It is going to be Chuck, because if two people were meant to be together, eventually they will find their way back. 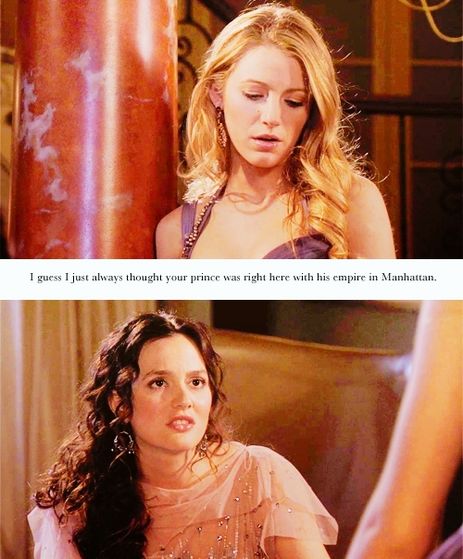 
‘Who could ever pag-ibig Chuck Bass?’ Chuck and Blair also need each other. Chuck needs her madami than the sky needs the sun, Blair has always been sa pamamagitan ng his side. When things went wrong and he did crazy things, she was there to help him pull through, even if that meant getting her feelings hurt in the process. She is the only woman Chuck has ever loved, and would die for. She has always stated to him that she is his family. Chuck has done many things, made many mistakes, but in the end he got Blair’s forgiveness. He does sacrifices things for her; he wants her to be happy. He also got hurt when he destroyed the only thing he ever loved. He actually left the country and changed his name, the only one who could make him come back was Blair. But he learnt, and here he is today, a mature young man who is ready for Blair to come back to him when she has realises for sure who she really wants to be with. Blair needs Chuck in the same way. He is the only one who accepts and loves Blair for who she is. She knows she can always be herself, and never hide anything away from him and at the same time be loved and accepted. She is always excited at the thought of being with Chuck; he is the only one who can give her what she really wants, to satisfy her needs. She craves for him after everything he has ever done, because she loves him.

Chuck and Blair have truly had the most beautiful scenes, and have had the most impact on me on Gossip Girl. The way they first caught each other’s eye was completely unexpected! In the first season before Victor/Victrola, no one would have known they would even be a couple, let alone an epic one. How different they are, but so alike, and the way the fans go crazy for them whenever they have one scene together. We want them because they are not just any average pairing… they have the angst, the chemistry, the storyline, both personalities merging, they change each other as people, and they have the best scenes in the ipakita for sure, they are not going to throw away Chuck and Blair after all this! For all the producers have made them up to be, this remarkable journey of this couple, Chuck and Blair will no doubt in my mind be endgame. Majority fans pag-ibig and OPT them as a couple, and even though I know they are going to be endgame, when they do, I will cry, reminiscing about their story of how they became Chuck & Blair. 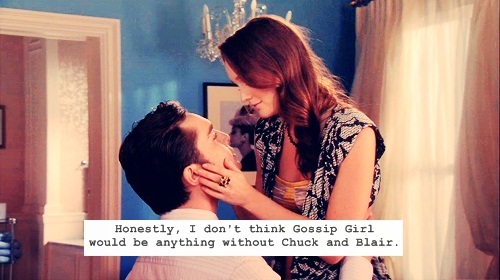 AngelusB, LuCe60bis and 2 others like this
delenadarti *sigh*...perfection
Chairlover92 Such a lovely article Reinforces what I should already know! Thank you and let's hope you are right :). 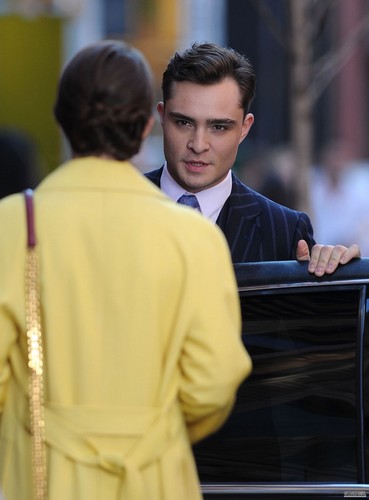 1
EL ON SET
added by Stephxcullen 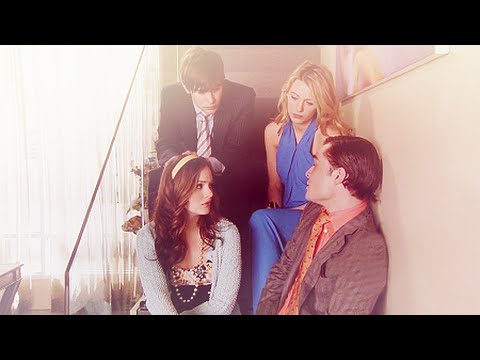 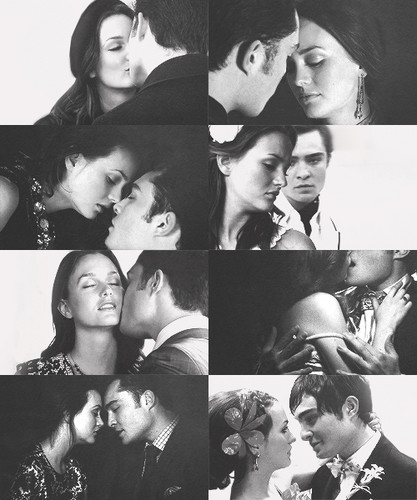