4
Gusot Fanfiction:The death scene
posted by LisaForde2
[b]I may have added some stuff that I made up myself so enjoy.

‘Rapunzel I thought I’d never see you again sinabi Eugene unaware Mother Gothel was behind him. ‘Eugene watch out’Rapunzel sinabi as she wanted to tell him that Mother Gothel was behind him. ‘Ahhhhhh’Eugene sinabi as he got stabbed in the chest. ‘No’Rapunzel cried.’Now look what you have done Rapunzell oh don’t worry our secret will die with his’Mother Gothel sinabi as she dragged Rapunzel into the secret passage in the tower. ‘No I won’t stop for every minuto of the rest of my life I will fight I will never stop...
continue reading...
2
My favourite characters from Tangled.
posted by LisaForde2 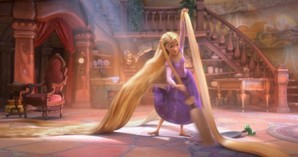 Rapunzel with blonde hair I love her hair and her personality.
>>>>>>>.MAY CONTAIN SPOILERS>>>

YOU HAVE BEEN WARNED.

I saw this movie a few days nakaraan and let me tell you it was the best Disney animated movie I have seen since Beauty & the Beast. It should be classified as a classic cause to me it is. Anyway I would like to share my thoughts on my favourite characters.

#1 Rapunzel: Voiced sa pamamagitan ng Mandy Moore she’s fiesty,dainty,beautiful,headstrong and independent. She wishes to see the lights of course as they appear every taon for her birthday. She meets a handsome rogue thief who stoled a crown from the palace and it is in...
continue reading...
Tangled: Modern-day twist?
posted by AStephens
OK, I know this might seem a bit strange, but I just got to wondering what things might be like if "Tangled" were set during modern times... I could really see Flynn/Eugene as he was... but once he admitted his name was Eugene, I could see him saying something like, "... but you can call me Gene." Also, during the last part, when he cuts her hair, I could see a missing "gapfiller," once he comes back to life, before he and Rapunzel return to her parents, where they're wondering about all the hair they're leaving behind:

"I don't know, donate it to Locks of Love?"
1
My first tagahanga fiction Eugene starts to fall for Rapunzel.
posted by LisaForde2 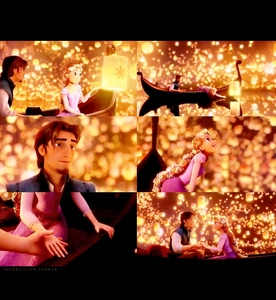 This is where they are on the bangka and Eugene starts to fall for Rapunzel. Enjoy.

Btw I am Eugene so here it is.

‘Are you ok’ I sinabi to Rapunzel who looked a bit nervous. ‘Im terrified’ she sinabi back. ‘Why’? I asked. ‘I’ve been locked away in a tower for 18 years dreaming of what would happen in the sky, what if this isn’t what I want’Rapunzel sinabi . ‘It will be’ I said. ‘But what if it isn’t what do I do then’Rapunzel told me on the boat. ‘That’s the good part I guess you can go and find a new dream’ I said.

All of a sudden millions of lanterns came out from...
continue reading...
2
Gusot My favourite tracks from Tangled.
posted by LisaForde2 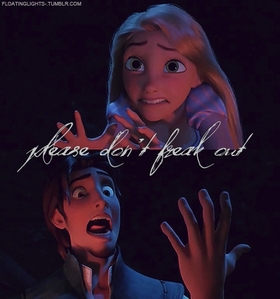 Don't freak out
As much as I pag-ibig this film here are some tracks that I simply adore enjoy.

#6 Healing Incantation: In at 6 is this song. Its rather short which is why I have it in at no 6.

#5 Kingdom dance: I must say I pag-ibig this instrumental piece as its such a feel good melody. Its rather Celtic which is one of the reasons why its awesome and memorable. 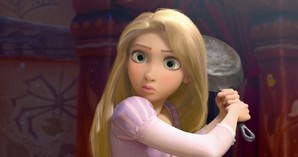 I absolutely loved this film as its got everything in it romance,comedy,action,incredible music etc so I have decided to do an artikulo on characters that are similar to other characters or people from real life.

#1 Rapunzel: She is my all time favourite princess as she is dainty, adventurous and funny. When I saw this movie for the 1st time I always thought that Rapunzel was like Giselle when she had the blonde hair I dunno she had the same kind of features but when she had the dark hairstyle I was like...
continue reading...
1
Gusot Movie Review(SPOILERS)
posted by LisaForde2 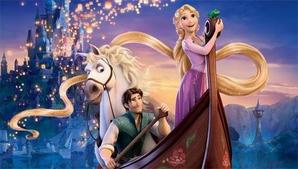 Tangled is a masterpiece
Disney went downhill after the 2009 movie PATF(Princess & the Frog).And since then the only movie I liked from Disney was the 2007 hit Enchanted which was about a cartoon princess transformed into a human version of herself and falls in pag-ibig with a handsome attorney(yep McDreamy).Now in 2010 Disney is back with a bang in this (“instant masterpiece“) . Gusot is about a Nawawala princess named Rapunzel(ex pop bituin Mandy Moore) who is kept in a high tower sa pamamagitan ng an evil woman named Mother Gothel(Donna Murphy) who stoled the girl as a baby as she has magical powers that comes out of her golden...
continue reading...
4
I See The Light lyrics
posted by bittersweet2242
All those days watching from the windows
All those years outside looking in
All that time never even knowing
Just how blind i've been
Now i'm here blinking in the starlight
Now i'm here suddenly i see
Standing here it's all so clear
I'm where i'm ment to be

All at once everything looks diffrent
Now that i see you

"I have something for you too. I should've ibingiay it to you before but i was just scared. And the thing is i'm not...
continue reading...
Movie Review Tangled[2010]
posted by LisaForde2 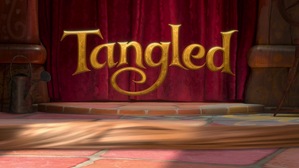 10/10
When I was a kid Disney was a big part of my life. It made me want to believe in my dreams and that someday my dreams will come true.

So when I was 19 at the time when I seen Gusot in February 2011 I was a bit skeptic yet excited and BOY what a movie it turned out to be. Not only is this movie so good its actually my ALL time favourite movie and if you don't know why well let's dive into the review.

The movie starts with a young man talking about his story on how his gonna die[yeah he was being so sarcastic here]and he explains that the story isn't about him in fact its about a young girl named...
continue reading...
The Nawawala Princess
posted by eilonwygeek1
Rapunzel is portrayed well in this film, though her character still has potential for something else. I am not sure what, but I feel there is still room left for her to do another movie. Perhaps a meeting with Anna or Elsa, who are revealed to be her cousins?
Those three could have heir own role in a totally new story where a family crisis has occurred, and the two blondes with powers go into action, and Anna feels left out. Then she hears that they are in a desperate need of rescue, and Anna must somehow find a way to help them that does not require magic (or cliches)! That would be great, if done right. Usually, Disney is a extremely lazy when it comes to sequels. However, I think those three girls need madami spotlight. Same goes for all the other princesses. Bring them back for a modernised sequel to their classic film. Will Snow White be a good Queen? She is only fourteen after all!
You Might Also Like...

Pub Thugs (Tangled)
1
The music of Gusot
posted by LisaForde
I have heard quite a lot of instrumental and songs from this movie and I must say I am very impressed with the music in this movie. So here is my highlight of songs that I heard from the movie.

#1 I see the light: This has to be one of my favourite songs from an animated movie since A Whole New World from Aladdin. I pag-ibig the gitara in the background and the harp as it makes the song unique and special. I pag-ibig how Flynn starts pag-awit the song after Rapunzel and the way he is looking at her makes my puso melt.

#2 When will my life begin: This is such a cool song as its like a to do listahan for your...
continue reading...
1
Don't leave me
posted by LisaForde
This is a spoiler so please enjoy the tagahanga fiction. My 1st tagahanga fiction for Tangled.

‘Don’t die Eugene,lease. bulaklak gleam and glow’Rapunzel sinabi as she was crying her eyes out as the man she loves was about to die. ‘Rapunzel its no use you can’t help me anymore I cut your hair off remember’Eugene sinabi to Rapunzel as he was trying to calm her down. ‘But I pag-ibig you Eugene’Rapunzel cried to him. ‘You are my new dream’he said. ‘And you were mine’Rapunzel cried out. A few segundos later and Eugene died. ‘No please please please don’t leave me I pag-ibig you Rapunzel cried out as she was pag-awit the song Healing incantion. As her tears were on Eugene’s face. A beam of light came out of nowhere and suddenly he woke up. ‘Rapunzel’he sinabi in his dying voice.’Eugene’she sinabi in excitement.’Did I ever tell you I perfer brunettes’he said. Suddenly Rapunzel fell on tuktok of him and kissed him.