6
It's not fair!(Gizzie related)
posted by amberRocks
I pag-ibig Grey's.Always has,always will.Season 1 and 2 was awesome.Then season 3 came.And something happened.Something wonderfull.George and izzie.When I saw them getting drunk I knew what was going to happen.And I knew it was wrong because george was married but you know what I didn't mind...Because his marriage was a mistage.He father just died.And how long he knew Callie in GA time 4-5 months tops...This wasn't right and he knew it.
Then one night,one beautiful night george and izzie had the best sex of their lives.
And I couldn't be happier.The susunod episode(3x19)still is my favourite.Izzie trying...
continue reading...
6
Patrick Dempsey new Fragrance. YAY =]
posted by JenniferDempsey
Grey’s Anatomy bituin Patrick Dempsey - who is already the face of Versace’s spring and summer men’s clothing lines - suited up and looked terrific in Beverly Hills on Monday, announcing that he will be creating a new Avon fragrance for men!

Devoted Patrick Dempsey fans may remember that his wife, Jillian Dempsey, is a celebrity stylist and makeup artist who serves as a consultant for Avon brands.

There's a picture which I will put in the larawan okay? Im so buying it I dont care if it's for men =D
10
Stop The WGA Strike NOW!
posted by docarzt
In the tradition of the "Nuts!" campaign that compelled CBS to resurrect Jericho sa pamamagitan ng shipping hundreds of pounds of nuts to CBS's corporate offices, link has begun a movement targeted towards the networks and the AMPTP to urge them, through the nuisance of tagahanga activism, to bring the strike to an end so our paborito show(s) can ilipat forward.

Our plan is to have fans, as many as we can get, to mail the studio head of their choice a lovely, but very inexpensive, Roller isketing charm. A "Cheap Skate" for a bunch of Cheap Skates.

For this effort to work, we need to bring national attention to it. You can help sa pamamagitan ng digging this article:

And of course telling fans everywhere to visit, sign up, and speak out at link.
10
The adorable Patrick Dempsey with his puso of gold.
posted by JenniferDempsey
Patrick Dempsey had hearts swooning in this hometown Lewiston, Maine, on Monday.

Dempsey's center is designed to help cancer patients and their families get free information and support both online and at the hospital. It will also offer programs like massage therapy and yoga that are clinically proven to help cancer patients heal. Also, staff will be traveling to madami rural areas to bring services to patients who may not be able to come to Lewiston.

Ya, he's pretty damn...
continue reading...
5
Screen Actors Guild Hopes to Avoid Strike Redux
posted by janina
Potentially bad news: the media buzz is about the pending actors’ strike, so we hope you enjoyed your few months of new flicks and fresh TV.

If the Screen Actors Guild strikes and our paborito stars walk, you can say goodbye to new fare on the screen. The only place you’ll be able to see A-listers like Patrick Dempsey and Ellen Pompeo will be the picket line.

To clarify, it’s still possible to avert the strike. But we’ve already seen what happened to Grey’s Anatomy the last time, with the WGA Strike.

On one side of the bargaining mesa is the Alliance of Motion Picture and Television...
continue reading...
9
wedding bells
posted by islbena
link


Grey's Anatomy" bituin Ellen Pompeo promised she wouldn't have a big wedding. She kept her promise.

Pompeo, 38, and Ivery became engaged last November, after dating for three years. In an interview last August, she sinabi the couple didn't plan a big ceremony because "we want one thing to ourselves."


Bloomberg and Deputy Mayor Patti Harris were the two witnesses, and an official from the city clerk's office performed the ceremony, Bloomberg spokesman Stu Loeser said.
5
END OF WGA STRIKE!!!
posted by tsunami1313
Heya all those grey's anatomy fans out there!!!


I have just received great news!!! According to link the WGA STRIKE IS NOW OVER!!! and although many series will discontinue, Grey's anatomy will not be discontinue-ing and will be back in production in no time!! YAY!!! and the long wait is now over!! and we can anticipate the rest of season 4 and hopefully several madami seasons after that!!!!
Let's go celebrate!!!!
haha!!!
3
Meredith's Past Comes Back To Haunt Her Even Though She's With Derek Part 3
posted by HoltNLucy4Ever

Nothing else mattered to her except her family and that family was Derek, Derek Junior, Jason, and Caroline. She didn't care about Eric at all. "I pag-ibig you, Derek Christopher Shepherd!" sinabi Meredith in her sleep.
"I made a mistake picking Addison over you!" sinabi Derek in his sleep.
"I made a mistake picking Eric over you!" sinabi Meredith in her sleep.
Meredith's marriage was a disater because she had her feelings for Derek still. Derek's marriage to Addison was a disater because he had his feelings for Meredith still. With the realization of her feelings for Derek, Meredith filed for divorce...
continue reading...
5
Grey’s Anatomy Episode 21 Season 5 - No Good at Saying Sorry (One madami Chance) Review sa pamamagitan ng Mr. Rex
posted by tdfalls
link

Our April 30th episode is based on the topic of "Being Sorry". It begins with Dr. Isabella Stevens on a gurney Alex is at her side they‘re nervously awaiting upcoming tests when Isabella's Mom makes her grand entrance. Dr. Stevens is shocked to see her Mom and is eager to know who called her and brought this whirlwind of emotional baggage her way.

Meredith and Lexie are surprised sa pamamagitan ng a visit from Dad who is completing a stage of his twelve step program sa pamamagitan ng apologizing to them for his behaviour while he was using....after all he's 29 days sober now. Lexie embraces Dad and his apology. Meredith...
continue reading...
16
Could Meredith be Pregnant?
posted by GA-19 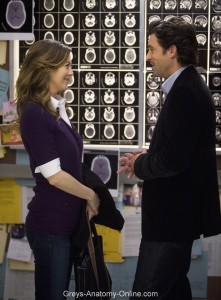 McCoat Over McBaby?
So, i've been around a few other boards and many seem to mention this. And, i have just gotta agree. The Little details that we would never see, other's did. I would of never noticed these little signs if no-one had mentioned it, but now that i do see the signs, maybe there could be a MerDer baby.

Evidence:
She had her amerikana over her stomach when she was talking to the cheif in front of the elevator. And then when they were in the Elevator, you can see all these pictures of kids and scans.

In my opinion, i think that its too soon for a baby on the ipakita for MerDer, beacuse this would mean that the ipakita would end soon, which i don't want. Clues to a series ending: Step 1, The main couples getting Married (in which they are according to shonda). Step 2, Babies! (which seems likely). Step 3, Living Happily ever after...

So is Meredith really Pregnant?

Tell me what you think. 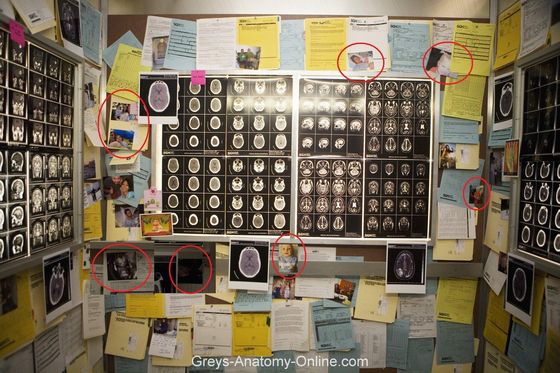 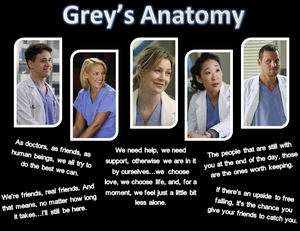 Awesome site in my opinion. great quotes, pictures, videos, and season recaps. the site is new and lookign for members. its free to join.. i highly recomend it to all greys anatomy fans. you wont be disappointed. its a very professional site and i reccomend that everyone visits it aspap.

link
link
link
link
link
link
link
link
link
link
6
COMMENT WITH YOUR GUESSES!!!
posted by FanDlux
Question: Can you tell me if Derek gets hurt in the Grey's Anatomy season premiere?
Ausiello: Judging sa pamamagitan ng that infamous promo, ABC certainly wants you to think that, right? Well, allow me to clear things up for you -- sa pamamagitan ng way of a multiple-choice quiz! (Why should ABC's promo department have all the fun?) I can confirm that two of the following take place in the Sept. 25 season premiere -- one for real and the other in Meredith's imagination (the other two are outright foilers).
A) Rose stabs Derek.
B) Derek suffers a puso attack and is visited sa pamamagitan ng the ghost of Denny.
C) Dr. Burke returns to Seattle...
continue reading...
7
Some Feedback Dealing With The Katherine Heigl Issue
posted by Krevetka16
I think that she is going over the tuktok wanting to only do pelikula a bit cuz Knocked Up and 27 Dresses weren’t exactly the best pelikula out there. I think she’s being kinda conceited cuz I mean if it weren’t for Grey’s Anatomy nobody would know her. I don’t know whether she should leave or stay, my only concern is how would they make her character leave without it being completely random? They’d have to invent a whole new story line. Which might make the ipakita interesting, but still it’s hard to determine that. I think that withdrawing from the Emmy nomination was in her eyes and...
continue reading...
12
Reasons to pag-ibig Maddison
posted by SunnyDevil
I found that in one forum. xD

Eric was shocked that Meredith had told Derek the truth about their wedding day. Jason was looking pasulong to his birthday even though his parents were divorced. Meredith honored their custody agreement which had ibingiay her custody in their divorce. Addison was over Derek and in pag-ibig with Mark. Meredith had no idea that Eric wanted them to give him a good birthday. Her life with Derek was better than the life she had lived with Eric.
No one had any idea that a major ferryboat accident had been hit. "All residents gather your interns and head to awaiting amublances! Attendings follow!" ordered...
continue reading...
10
My Rant on the Merder engagement surprise
posted by McDreamyluva 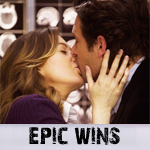 Okay people, so I'm basically going to rant about the Merder engagement because honestly I feel like killing someone if I don't get this out.


Gosh, Grey's has got to have one of the best soundtracks ever!!! can't really choose a paborito among them. hmm, all i know is that my listahan would include, The Fear You Won't Fall sa pamamagitan ng Joshua Radin, Chasing Cars sa pamamagitan ng Snow Patrol and Big as the Sky sa pamamagitan ng AM Sixty...how about you? which songs do you like?

What if Meredith and derek didnt get married? What if derek and rose didnt bake up? Would Meredith moved on? Would derek want her too?

HERES WHAT I THINK WOULD HAPPEN BETWEEN DEREK AND MEREDITH AND.... ROSE

Christina: You cannot be serious? are you really gonna wait for McAss to ipakita up on you doorstep kock on your door with his take me back McDreamy eyes and asong babae baby tear so he can take you to a magical surgical world?

meredith: was i wrong to brake up with derek?

Christina: Wat? me being supportive...
continue reading...
7
GREY'S ANATOMY season 7
posted by BuffyFaithFan1
Alright, we all were amazed and our jaws were open at the end of season 6 because of it's two oras season finale, and now, as we are awaiting the return of this amazing show, a season 7 premiere date, and the first episode's pamagat of ssn7 has been released also!

So, here is the best part: Season Seven of GREY'S ANATOMY will air this September 29th, of 2010 so BE READY PEOPLE because Season Seven will be a definite knockout!
12
Grey's Anatomy Spoiler
posted by laughingGrl
i got this from entertainment weekly. it is written bylynette rice. i took out some and stuff in [] is me () is her. ... means i took something out.


the grey's anatomy doctors leave the OR and begin their familiar trek down one of seattle Grace's drab hallways, and a few segundos later, they clasp hands [me:derek and mer]... derek slowly massages the tuktok of Meedith's hand; the motion becomes madami vigorous until he's practically fubbing off her skin. (in a seductive way, of course.) pompeo comletely loses her cool and steps out of character. giggling, she makes a beeline ot the director and holds...
continue reading...
More Cards
12345678910111213