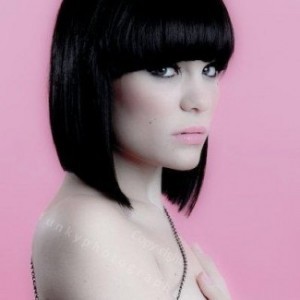 We may not have all the answers
Oh I know that we can change some of the things that are beyond our control
And the vision of us may be blurry
But use your puso to see
Just follow the beat, the rhythm will lead you right back to me
Sometimes its a game of give and take
Its easy to break but hold on and wait
Have a little faith

I will go down to the last round
I'll be your strength to find you when you get Nawawala in the crowd
So I'll stand up tall, if sa pamamagitan ng chance I fall
Then I'll go down as a casualty of love

Yeah, I forget about the consequences
For a minuto there I lose my senses
And in the heat of the moment my mouth starts going
The words start flowing, oh

I hate that I let you down
And I feel so bad about it
I guess karma comes back around
'Cause now I'm the one that's hurting, yeah

And I...
continue reading...
domino lyrics this is the only song i know
posted by agentflora
I'm feeling sexy and free Like glitter's raining on me You're like a shot of pure ginto I think I'm bout to explode I can taste the tension like a ulap of smoke in the air Now I'm breathing like I'm running cause you're taking me there Don't you know...you spin me out of control Ooh ooh ooh ooh We can do this all night Turn this pag-ibig skin tight Baby come on Ooh ooh ooh ooh Boomin' like a bass drum Sparkin' up a rhythm Baby, come on! Ooh ooh ooh ooh Rock my world until the sunlight Make this dream the best I've ever known Dirty dancing in the moonlight Take me down like I'm a domino Every second...
continue reading...
1
mamma knows best
posted by jessiej103
Wow, there is something going down Like the storm in the sky, ooh I ain't gonna be played sa pamamagitan ng your behavior How can I trust someone who's lying to me?
So bow out, goNow I sinabi bow out and leaveI sinabi take your stuff and go'Cause you're not for me, no
Mamma knows best when times get hardAnd papa always has a joke to make me laughSee, mamma knows best when I feel downTo bring me up and always keep my feet on solid ground, yeah
See I ain't no old rag dollThat you can pick up and dropAnd all of this inconsistent love, yeahI think it's about time that it S-T-O stops
So bow out, goNow I sinabi bow out...
continue reading...
1
Jessie j now has purple hair!!!
posted by check-it-out13


The 'Nobody's Perfect' singer has been recovering from a broken foot but has undergone a drastic hair makeover ready for her return to the stage.

Her new hair colour, however, seems to have come from an unlikely inspiration.

"Erm who has seen the colour of ribena cartons?... The purple at the tuktok :) " Jessie tweeted and then later followed it with a pic.

Jessie went on to say she's kept her signature bob style but the new colour is on just in time for her festival comeback.

"I'm happy to announce I will be at 'The Big Chill' festival and 'V Festival' ," Jessie posted this weekend. 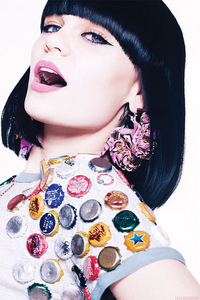 I don't wanna be the reason, we don't get down
So imma let you do the leading, and follow you now
See I just don't usually do this, but you bringing me out

All the doubts I had have gone away,
When your touching me I'm not afraid
Knowing the same, going away, here to stay
I just wanna be your girl (your girl)
Tell me, woo yeahh

I can be, all you want, what'doyah say
I just wanna be your girl, yeahhh

Cause you got my puso on lock, it's so unreal you know
Don't want this to stop, your so damn keepable
Feel your magic touch, it's unbelievable
I gotta have ya, like abracadabra

Ya got my puso on lock, it's...
continue reading...
2
Nobody's Perfect Lyrics
posted by KateKicksAss 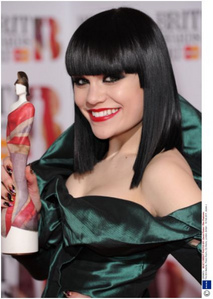 When I'm nervous I have this thing yeah I talk too much
Sometimes I just can't shut the hell up
It's like I need to tell someone anyone who'll listen
And that's where I seem to fuck up, yeah
I forget about the consequences, yeah, for a minuto there I lose my senses
And in the heat of the moment my mouth's starts going the words start flowing, ohh


But I never meant to hurt you, I know it's time that I learnt to
Treat the people I pag-ibig like I wanna be loved
This is a lesson learnt I hate that I let you down and I feel so bad about it
I guess karma comes back around cause now I'm the one that's hurting...
continue reading...
Biography :)
posted by LadyL68
Jessica Ellen Cornish, madami commonly known as Jessie J, was born on March 27, 1988, in Redbridge, London. She attended a prep school, in which she was expected to be a strong student, like her two older sisters. But she claims she "was never really good at anything and also sinabi "at school they were like, "oh, you're a Cornish girl" so they kind of expected me to be like my sisters" At the age of 11, she joined the school choir, but was shortly kicked out for "singing too loud." Can you belive that?!?!?!?! Kicking Jessie J out for pag-awit too loud! Well, I bet whoever did that is regretting...
continue reading...
2
Jessie J's New Album Who You Are
posted by LadyL68
Here's the playlist :)


This is all from her new album, Who You Are. All songs were either written or co-written sa pamamagitan ng Jessica Cornish, or as we all know her, the talented, wonderuful Jessie J.
You Might Also Like...

Björk
5
JESSIE J - WHO YOU ARE LYRICS
posted by darina25
I stare at my reflection in the mirror...
Why am I doing this to myself?
Losing my mind on a tiny error,
I nearly left the real me on the shelf ...
"no,no, no, no..."

Don't lose who you are, in the blur of the stars
Seeing is deceiving, dreaming is believing,
It's okay not to be okay...
Sometimes it's hard, to follow your heart.
Tears don't mean you're losing, everybody's bruising,
Just be true to who you are
(Who you are)x11

Brushing my hair, do I look perfect?
I forgot what to do to fit the mould , yeah!
The madami I try the less it's working yeah yeah yeah
Cause everything inside me screams, "no,no,no,no..."...
continue reading...
1
JESSIE J - PRICE TAG LYRICS
posted by darina25
Okay, Coconut man, Moon Heads and Pea
You ready

Seems like everybody's got a price,
I wonder how they sleep at night.
When the sale comes first,
And the truth comes second,
Just stop, for a minuto and
Smile 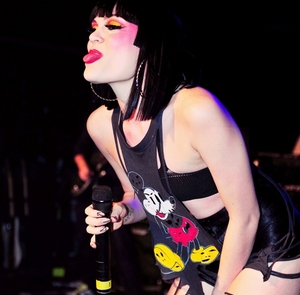 Mummy they call me names
They wouldn't let me play
I'd run home, sit and cry almost everyday
'Hey Jessica, you look like an alien
With green skin you don't fit in this playpen'
Well they pull my hair
They took away my chair
I keep it in and pretend that I didn't care
'Hey Jessica, you're so funny
You've got teeth just like Bugs bunny'

Oh, so you think you know me now
Have you forgotten how
You would make me feel
When you drag my spirit down
But thank you for the pain
It made me raise my game
And I'm still rising, I'm still rising
Yeah

So make your jokes
Go for broke
Blow your smoke
You're not alone
But who's laughing...
continue reading...
Jessie J's ex-manager wants 20 per cent of her earnings
posted by check-it-out13
Jessie J’s former manager is reportedly trying to make the bituin pay him a fifth of her earnings for the rest of her life. According to The Mirror, Raymond Stevenson claims he discovered Jessica Ellen Cornish at school when she was 15 and turned her into the bituin she is today. The 23-year-old British singer is now signed to Universal Republic and Crown Management, but Stevenson has started a legal battle, arguing she is still legally under contract to him and that he wants 20 per cent of her earnings for life. A pinagmulan told the newspaper: "Raymond Stevenson was hugely influential over her in the early days." Crown Management refused to comment. 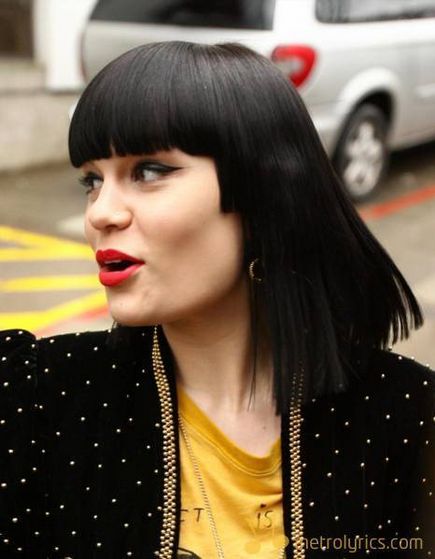 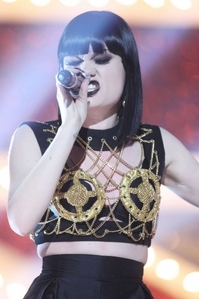 jessie has two sisters, who are five and seven

years older than her, who were both head girls

at school.Unlike her academic sisters, jessie

has stated she was "never really that good at

anything". She sinabi "At school they were

like 'oh, you're a Cornish girl' and they kind

of expected me to be the same as my sisters.

Give me something to draw or an outfit to pick

for someone, or hair, make-up, acting, write a

song, I'm fine with it, but anything to do with

sums – it was never my thing." She also sinabi she

never based her intelligence on her exam

results.She also sinabi she was always good at

pag-awit and it was her "thing." However, she got

banished from the school choir, for being too

loud. She stated "I was in it for a araw and some

of the adults were moaning that their kids were

imagine? I was heartbroken."says jessie j
Big White Room (Lyrics)
posted by Ryan231
Sitting in a big white room alone
Tilt my head back, feel the tears fall down
Close my eyes to see in the dark
I feel young, broken, so so scared (mmmmmm)
I don't wanna be here anymore
I wanna be somewhere else
Normal and free, like I used to be (oh)
But I have to stay in this big white room
With little old me

Sitting in a big white room alone
Close the door
Don't want the pain to come in (no no no no no no)
I clench my fist
And try to stay strong
I cry,...
continue reading...
3
Jessie J
posted by Iva1lo 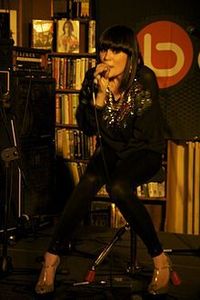 Not to be confused with Jessy J.

The Pricetag songstress, who travelled from Brisbane overnight with other headline acts including Fatboy Slim, Tinie Tempah and Swedish House Mafia has contracted a “temporary illness” according to statement released sa pamamagitan ng promoters this afternoon.

The British singer helped kick off this year’s Future Music Festival in Brisbane last night before travelling through the night ahead of her set in front of an expectant crowd of 37,000 at Arena Joondalup tonight.

“Everyone is so tired we are ALL irritable. Gonna be a fun plane journey #sarcastic,” she tweeted before boarding the plane to Perth yesterday.

Her solo ipakita at Challenge Stadium on Monday night “is still in the schedule at this stage” according to officials at Future Music.

Australian DJ Anna Lunoe has been announced as her replacement act at tonight’s festival.
jessie j at the big chill - check out her cat-like look!
posted by check-it-out13

Jessie J made her first appearance in months at the festival after breaking her foot at the start of the summer, and she did it in style with a wild looking outfit inspired sa pamamagitan ng cats.

As well as a leopard print catsuit, Jessie wore a hat featuring little pussycat ears while pag-awit from her trono at the gig.

"The Big Chill was HOT! Thank you for going iinnnn even in the rain!!! " Jessie tweeted.

"Amazing ipakita @kanyewest was a honour to open for you. 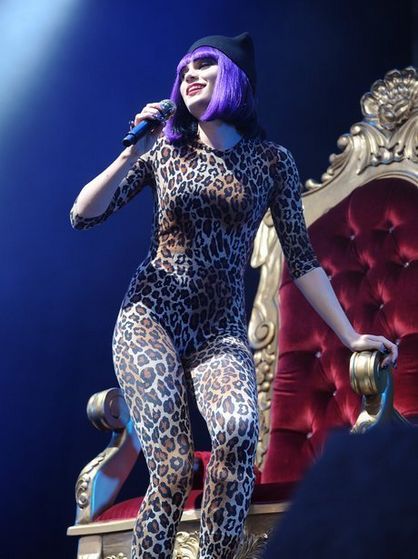 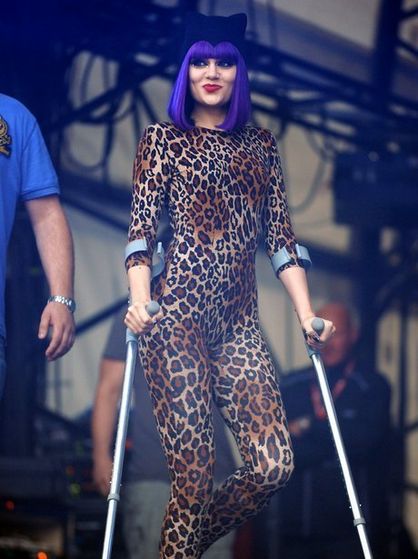 Seems like everybody's got a price,
I wonder how they sleep at night.
When the sale comes first,
And the truth comes second,
Just stop for a minuto and
Smile

Why is everybody so serious?
Acting so damn mysterious?
Got your shades on your eyes
And your heels so high
That you can't even have a good time