It was a bright Sunday morning. The blue sky was clear and looked like a great ocean of baby blue. The birds chirped in beautiful melodies that sounded like a beautiful violin orchestra because of the high pitched voices. The breeze seemed to whisper as it whistled through the trees. But that morning wasn’t beautiful.

Skipper was on the platform, waiting for Kowalski to get home, himself grinning because he knew his friend would always take his side, and Private smiling because he was excited to see him. Rico, however, sat in the corner of the HQ looking around the room and had his eyes filled with tears.

Why won’t Skipper believe me? Rico thought as the tears ran down his face. That was all. And nothing more. Even if I wanted there to be. Rico wiped his tears and looked down. He felt a little confused about the last remark that he had made in his head. What had gotten him to say that?

Suddenly Rico heard a loud thump at the ceiling. He knew that Kowalski was probably home, and his puso started beating louder. He didn’t know what side Kowalski would be on.

“KOWALSKI!” Private squealed in excitement and he tied his flippers around Kowalski. Kowalski looked down and smiled at him, even if he couldn’t breathe very well because of Private pressing all of the oxygen out of his thin body figure.

“Hello Private! Skipper!” Kowalski sinabi happily. He then noticed that someone was missing. “Where’s Rico?”

“I have to talk to you about him. The guy’s got a crush. And I can’t risk things as silly as crushes in this military unit.” Skipper explained quickly. He needed to finish this mission as soon as possible.

“RICO?!?! A CRUSH?!?! ON WHO?!?!” Kowalski yelled, but it sounded madami like he wanted to burst out laughing. A CRUSH! RICO HAVING A CRUSH! THAT’S INSANE! He thought.

“Marlene.” Skipper sinabi dully, trying to tell Kowalski that this was really serious.

Kowalski then stopped laughing and his eyes widened. Rico having a crush on Marlene. That made it even madami impossible for him to believe it. Skipper sometimes assumed things that were way off. He thought this could probably be one of those times.

“I’m going to have to go talk to him.” Kowalski sinabi quietly. He knew that he was the one that could make Rico say ANYTHING. Kowalski had a way that made hypnotized people into doing something they would rather not do. He thought that this time, it could be a easier since he was his best friend.

“Rico?” Kowalski asked when he went into the HQ. Everything looked pretty dark to him and he could quite find the dark ibong dagat anywhere.

“Kowalski.” Rico replied to him, trying to notify him where he was. He was really happy to see him, he was just not in the mood to ipakita it.

“Rico. I need you to talk to me. Skipper tells me you have a crush on Marlene, and I really need you to tell me the truth. Please. Is it true?” Kowalski tried to sound as peaceful as possible, his words turning into a poem as he spoke.

“NO.” Rico shook his head. He didn’t have a crush on Marlene. That’s what his head told him, but he was beginning to doubt in himself.

Kowalski smiled when he looked into his eyes, because he noticed that it was probably true. He didn’t. Rico had never lied to him before, and Rico told him all his secrets. Every single one of them.

Rico got up and went to get his doll. Kowalski examined Rico’s actions. He thought it was really cute when he sang to his doll and when he kissed her gently, obviously in pag-ibig with her. But this time, it was different. He just picked her up and sat her in front of him.

He began speaking to her in a couple of words.

“Rico no pag-ibig doll. Doll no pag-ibig Rico.” Rico spat out slowly as he watched his doll. He watched as her smile glowed and she didn’t ilipat a muscle. Rico smirked. Of course she wouldn’t cry, she wasn’t real.

Rico put down his doll and he went to lay on his bed. For some strange reason, he couldn’t get Marlene out of his head. He just thought about the way that she smiled at him whether she was happy or sad. He also thought about the times that they talked about her family and things that Marlene wouldn’t trust most with.

“KOWALSKI! CODE RED! WE ARE NEEDED IMMEDIATELY AT OUR MOTHER’S! SHE’S DYING!” Skipper ran in shrieking. Kowalski immediately pulled out their old car and sat in the seat.

Rico just laid on his bed. He didn’t want to go. It wasn’t his mom anyways. He had been the only one who wasn’t related to any of them and it depressed him a little from time to time, but he didn’t really didn’t mind.

He watched as his mga kaibigan left in the little kulay-rosas car and he laid down again.

Marlene was sleeping on her bed. She had taken a nap after the long araw that she had the araw before. She thought it was very different. She thought that she probably was crushing on Rico sa pamamagitan ng that time because of everything that had happened, but she was sure that he didn’t like her back. Rico only showed pag-ibig for one thing and one thing only. His stupid doll.

What does he see in her? She’s a doll! Marlene thought. Wait! I’m jealous of a doll? THIS IS NOT HAPPENING! I’M NOT! I DON’T LIKE RICO! AND I COULD CARE LESS ABOUT HIS STUPID DOLL! WHY MUST SHE BE BLONDE AND HAVE BLUE EYES? WHY DON’T I HAVE THAT?

Look at me. I’m stupidly asking tanong to myself. This is not normal behavior. She chuckled.

She then felt a draft coming in from the door of her habitat. She thought she had closed it the araw before with a curtain. She wanted to cover it up again, but she was much too lazy to get up.

“I wonder what could have happened.” Marlene sinabi to herself as she turned back to her wall.

Marlene turned around to see who it could be. She expected it to be Skipper because of the use of the word doll face, but she came to shock as soon as she noticed who it was. She shrieked.

Author’s Note: -gasps- LOL, I thought I might as well add some action into the story XD But I couldn’t let Skipper get in the way :p So I sent him away…-grins evily- I’m sorry I haven’t updated this story in some time and I’m sorry if you thought that this story was crappy. I swear I’ll update sooner and I’ll make the susunod Chapter…WAZZAAMM!
Dariganc92 and ilovepenguins like this

11
Nuts To You
added by kivamarie
video

22
Nickelodeon Slime Commercial - Penguins of Madagascar
added by yokaisummoner
[DISClAIMER: I do not own this; this was uploaded sa pamamagitan ng ThibaultAnd.] Didn't see this here so...yeah, "Penguins of Madagascar getting slimed. Without watermarks in center and in good quality . Enjoy ;)"
video
slimed
private
rico
maurice
julien
mort
marlene
skipper
kowalski
penguins of madagascar

4
Marlene - She lobo
added by VenezuelanOasis
hehe, really she is like Shakira
video
penguins of madagascar
marlene

5
Alone in the rain
added by Rico14 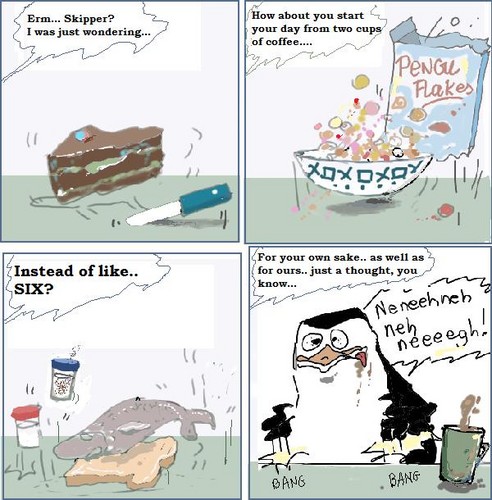 4
Too much of (coffee) heaven
added by Iroto122 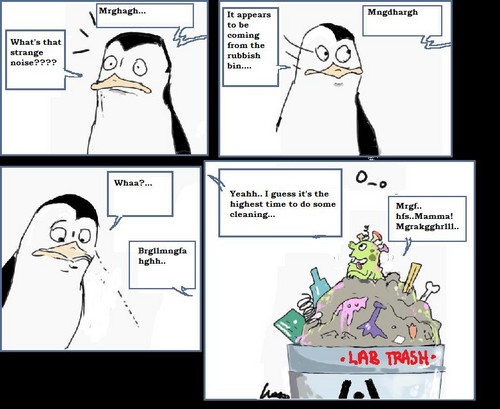 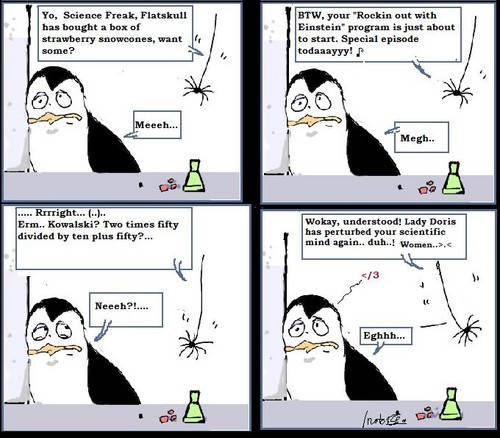 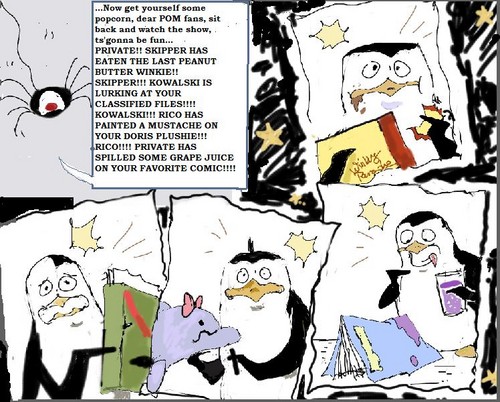 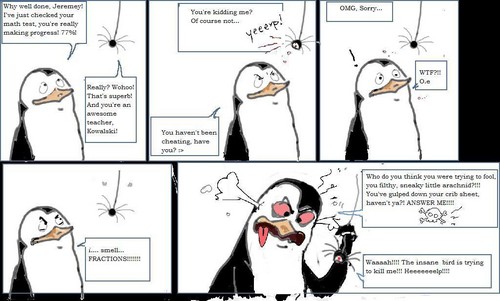 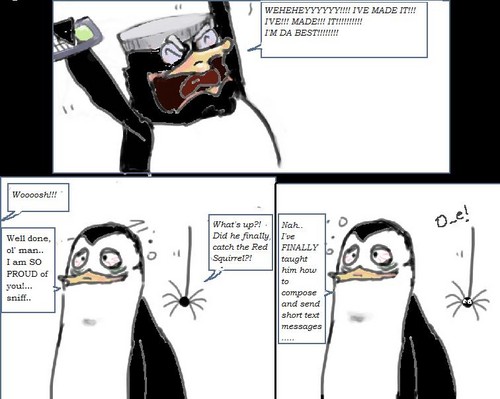 8
A Great Success
added by Iroto122 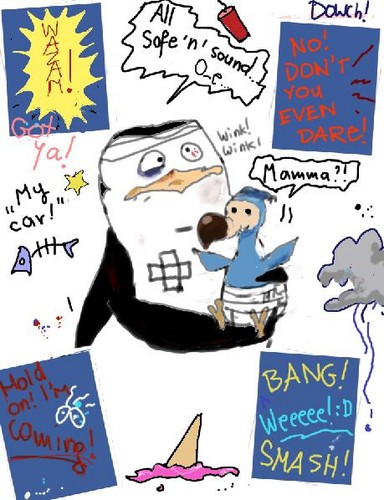 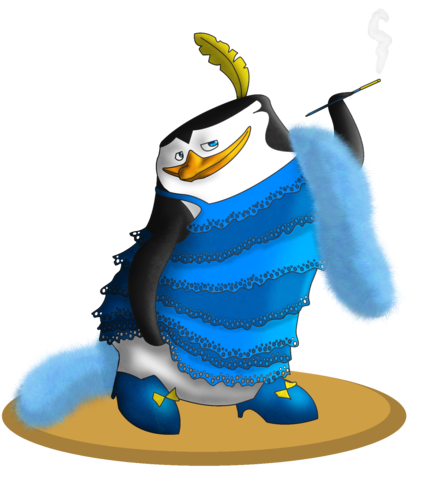 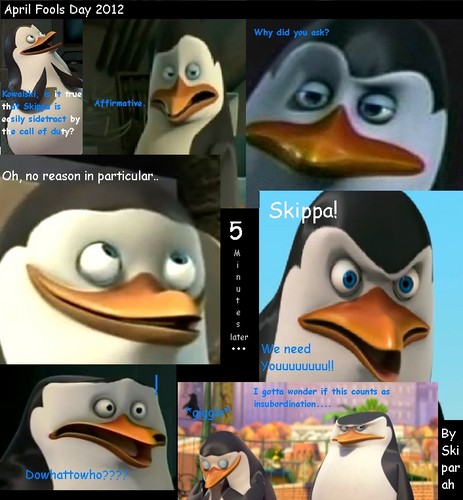 7
Possible Insubordination
added by Skiparah
Source: Me and the pom crew. 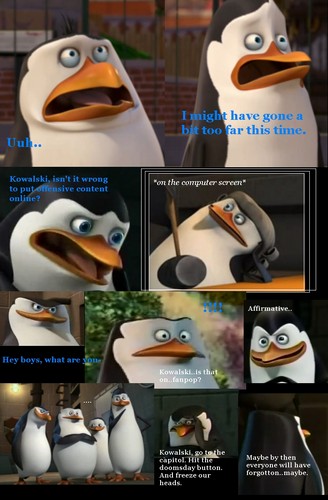 9
Solution: Doomsday
added by Skiparah
Source: MS paint and the makers of pom 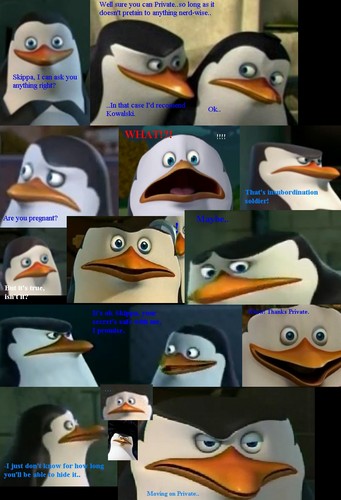 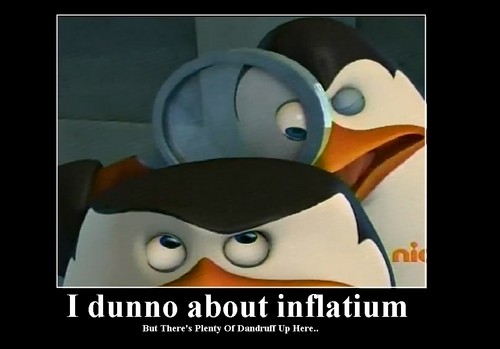 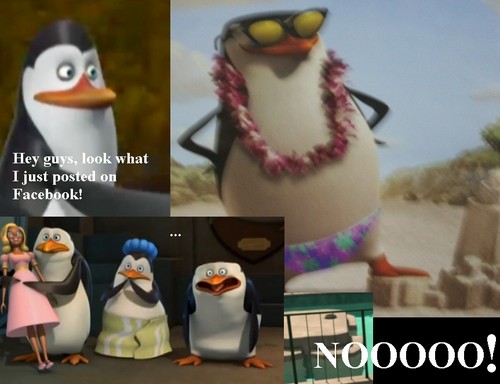 6
Exposed
added by Skiparah
Source: The penguins of madagascar 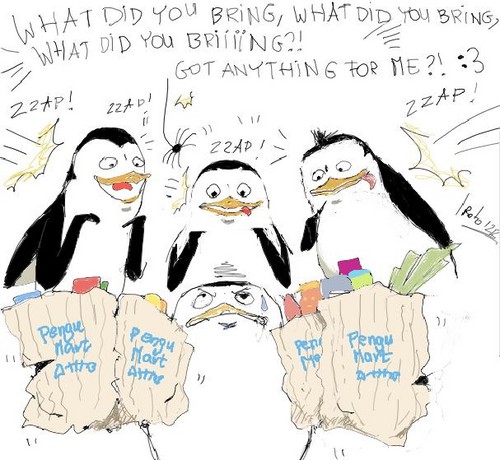 7
Back From Shopping
added by Iroto122 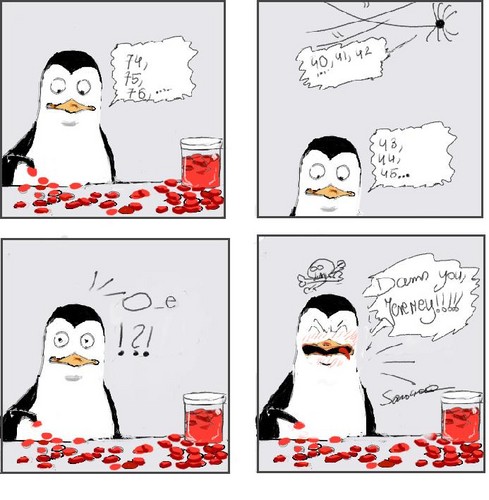