Have you seen the Tv drama called Falling Skies? Do you think it could be a The Host inspired drama?

I know it's not exactly the same but there are some similarities. In Falling Skies, the world is invaded sa pamamagitan ng aliens and they kidnap the kids and kill the adults. On the backs of the kids they take, they put little worm aliens that make the kids follow them around. The worms are much bigger than the ones in The Host and they're visible at the back of their necks. The aliens on the ipakita have legs like spiders. In the Host, the aliens arrive earth in gagamba form, too. On the show, there are also human groups trying to revolt against the invaders. What do you think ? 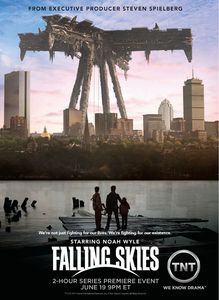