2
listahan of Karma done to every contestant
posted by HoldsteinSingh
Knowing that TDWT was the latest season we get to see the original contestants before they were replaced sa pamamagitan ng the 2012 cast, I made a listahan ipinapakita the karma done to them. We'll start with the TDWT commentators since they were completely left out of that season:
JUSTIN- During the last time he competed, he fell off the building, he broke every bone in his body. In the reunion special, he was one of the contestants that Nawawala their chance to compete in TDWT.
KATIE- Left out of TDA and TDWT completely.
BETH- Nawawala TDA to Duncan, the same one who quit TDWT and was captured sa pamamagitan ng Gwen and Courtney, got arrested in France, and missed out on TDWT, along with six others.
SADIE- Same reason as Katie.
EVA- Same with Katie and Sadie.
TRENT- Went nuts to get Gwen back from Duncan.
GEOFF- Betrayed when Bridgette flirted with another boy.

"Sierra, you're choking me", sinabi Cody who was barely breathing.

"Also, it's been, like, three months since the last time I saw you."

"I know where to go! C'mon Codykins!" Sierra grabbed Cody's arm and they both ran off.

They both arrived at the set from 'The...
continue reading...
Total Drama Blank!!!! (Episode 14) I Say Pip Pip
posted by starburst-rock
Rayla: uy Starburst... Y'all wanna here a joke? *giggles*

Rayla: Ok :D *snickers* What did the baby horse say when he sneezed?

Star: Can we just get this over with? I have some things I need to do. *smiles at Noah*

RunningFromTheCops:Oh nothing just running from the RCMP for the rest of my teenage life.

GossipDiva:Gwen and Courtney are now sisters!!!

GossipDiva:Well Courtney's mom divorced her husband and fell in pag-ibig with Gwen's dad and now their engaged!!!

*DarKnessQuEen...
continue reading...
Lindsay doing Kesha parody
posted by bcthestrongest
Lindsay: wake up in the morning looking greener then sherk (wheres that Donkey) sleeping in a tub can really mess up your neck before i leave i stop and vomit up tekila and glitter *throws up* it seems i spend half of my araw with my head in the sh*ter *takes vomit out of her hair*got vomit up in my hair hair but im way to sick to care now im falling down the stairs *falls*ah i-i-i pull myself off the floor and im almost out the door but my family is waiting for me *Noel me and Buto as her family* o crap not again its fine i can stop it anytime
Noel: thats a lie u wont try now u made your mother...
continue reading...
Total Drama High School, Season 2: Episode 1, Part 2.
posted by PhoenixRoyale
Ilana: Alright, it's time for you girls to ilipat into cabins! :D

Ilana: -_-....
Cabin 1 will have Nikita, Kirby, and Rikki.
Cabin 2 will have Celine, Ashley, and Lulu.
Cabin 3 will have Sammy, Scout, and Annie.
Cabin 4 will have Lexxi, Lia, and Rene.
Cabin 5 will have Corabella and Andrea.

Now, for the challenge! :) Today, you will hunt for some jewelry hidden
somewhere in the school, and place them with this basket with pearls woven in!

Corabella: Shiny....*Tries to touch pearls*
Ilana: DON'T TOUCH IT! *Slaps Corabella's hand*
Corabella: BUT I MUST HAVE SHINY >:U
Ilana: Too bad because you'll...
continue reading...
1
Duncan and Blaineley Return and Debute Theory
posted by Duncan_Courtney
*WARNING MAJOR SUPER SPOILERS AHEAD*

I was watching Super Crazy Happy Fun Time Hapon again today, and I got to thinking, in the susunod couple of episodes, both link and link leave, meaning that DJ and Lindsay will be the last two people left on Team Victory.

So basically, there would be two contestants left on Team Victory, and five left on both Team birago and Team Chris.

Team Victory can't compete properly with just two members, Chris would have to;
- Bring back one or two contestants
- Merge the teams
- Or have a member from another team go on Team Victory.
Because we've seen multiple pictures of...
continue reading...
3
Total Drama Believers-episode 2 part 1
posted by STALKER-TOAST
--
Theme song play
--
The camera pans from side to side of all the contestants in the mess hall,which this time around was outside.
Buddy.Buster,Leeroy,and Mr.Fluffykins are sitting at the same table,trying to eat the food.
Leeroy:*looks at the other contenstants on his team with a scowl*Bastards.
Buster:Leeroy,I know what they did was horrible,but remember,they'll all get what's coming to them eventually.
Mr.Fluffykins:Speacking of getting stuff,what'd you do with the monster,Buddy?
Buddy:*pulls it out of one of his pockets inside his jacket*Nothing.
Buster:Oh,I'll fix that.*opens it,turns Buddys head...
continue reading...
1
Total Drama Real Life Part 1
posted by RavenRox2

Marcuse
Chris: Welcome to total drama real life! 12 newbies with 3 oldies! everyone's already here and chatin' up a stoooorm! the newbie's are.......
Rayven, Penny, Jake, Lulu, Lisa, Aydan, Marcuse, Mack, Kelly, Jar3d, Natalie, and Jade! the oldies are, duncan, Owen, and Harold. the newbies just got here and there looks like pag-ibig is in the air and friendships are forming!

Duncan: what;s yyour name?
Rayven: Rayven. and i know who you are!
Duncan: Really?!
Rayven: well duh!
Duncan: how old are you?
Rayven: 16!

Chris: duncan and rayven are off to a good start!

Chris seems like...
continue reading...
2
If I was Trent
posted by IDDfan
paborito movie: 9

my paborito song: nine in the afternoon

my paborito animal: cockroach because it can live nine days without head

this was the surprised geuss pic
tamiki:nothing happened. roxy:alot has happened. Twins:you kissed andrea you sly dog you. tamiki:WHAT!! Christy:theres visitors?? Roxy:there here already??? ranma:sup Roxy:make your self at home. Ranmas dad:roah roah!!! Christy:AHHHHHHHHHHHHHHHH A PANDA. ranma:thats just my pop. Roxy:christy get some hot water. christy:why? Roxy:get the hot water now!!!! Christy:fine. Ranma:how did you know??? Roxy:oh your dad told me on the phone. Shampoo:RANMA!!! (snuggles ranma) Ranma:I cant belive you followed me. (Pours hot water on panda) Ranmas dad:do you got any pagkain like noddles!!! Ranma:POP you can...
continue reading...
total drama the haunting episode 8 part 1
posted by splinter505
Phil: last time on total drama the haunting, 2 campers got to be clowns while the rest sat down to watch it at the end jumanji won the zombies a trip home. what will happen who will loose and while my girlfriend visit find out madami on this episode of total drama the haunting.
*horn honking*
Phil: looks like there back
killer zombies: *getting out of limo*
Phil: wait for it
death: were already here
*another car horn
Phil: say hi to Alex and Kevin the werewolf
Aydan: why is Alex back?
Phil: i Nawawala a bet
jumanji: what is the werewolf here
Phil: that was the bet, oh and i'm getting bored of the teams, so i'm breaking the teams, ghost bring the zombies
ghost: ok
Phil: time for a commercial break
4
Manga Crossover Ch. 4 - The pag-ibig of the Black Rose
posted by Lolly4me2
Sofie panted and huffed on all fours on the floor.
"That's enough special drilling for the day," Duncan told her.
"Thank you... so much."
"You handled the ribbon very well. You're making very quick progress." He smiled.
"Do you really think so, Duncan?" Sofie looked up at him still panting.
"... You don't really buy that stuff, do you?"
"SHUT UP, RANMA!!" She screamed, tanlged in a mess of ribbon.

"Even if it's true..." Sofie muttered.
"... It's only a week until the match. I should have known, I never should have agreed to help." She sat in silence, while small drops of water dripped down her cheeks...
continue reading...
10
Who killed Chris Mclean??????? Book 1.
posted by megaDUNCANfan
vamp_grl_123 and me worked hard on these stories....here they are......


"Leave me alone Chris!!!"Courtney said,"come on please be the co-host in the new season???Please???"Chris got on his kneese and pleaded"PLEASE!!!!"He said."ok."Courtney sinabi "meet me at my trailer at 8 so you can sign."later at 8 "hey courtney" chris sinabi Courtney walked in, at 9 she walked out of the trailer and headed to Duncan's house "Hey prinsess, wat r u doin here?'he sinabi flirty,"here to visit."she sinabi halik him and he pulled her in.


There is 1 witness.
2 accused.
The person Who did it.
And Chris's lover(wife).


One thrilling series with a couple of surprizes!!!!I am not kidding!!!!


I live 4 the drama!!!!
His lover swears to kill whoever killed her husband.

"Leave me alone Chris!!!"Courtney said,"come on please be the co-host in the new season???Please???"Chris got on his kneese and pleaded"PLEASE!!!!"He said."ok."Courtney sinabi "meet me at my trailer at 8 so you can sign."later at 8 "hey courtney" chris sinabi Courtney walked in, at 9 she walked out of the trailer and headed to Duncan's house "Hey prinsess, wat r u doin here?'he sinabi flirty,"here to visit."she sinabi halik him and he pulled her in.
1
Total drama culedsac episode 2: first elimination episode
posted by dxarmy423
Chris: welcome back to total drama culdesac.

Chris: the winners of the races were:

Chris: so that means noah, owen, nazz and 3 other campers chosen at walang tiyak na layunin will be put up for elimination.

Chris: here are the campers up for elimination

Leshawna: what I didnt even do anything and Im up for elimination.

Katie: but if I get eliminated then I will have to leave sadie!!!

Chris: some body shut her up please!!

Please...
continue reading...
1
duncan,courtney,and ashley(part 4)
posted by god-of-love
*phone rings*
"hello."said courtney sleepy."hey wats up?"said duncan very happy."oh is u duncan,look i going to talk to u later u know that if my mom wakes up and sees me talking to u she will kill me!luv ya!"said courtney hanging up."omg is so early why will duncan wake me up at 5:00am?'courtney asked her self.
*at bridgette's house*
"geoff get up!geoff!geoff!!!!!!!(bridgette slaps geoff)""wat was that for?"said geoff."courtney want me to go with her to the club.can u come with me?"asked bridgette."no!im too sleepy and me and duncan r going to watch the football game that tyler is playing tonight."said...
continue reading...
3
Total Drama Fanpop Ep.2
posted by vamp_grl_123
Cameras start. V and Heidi are sitting in the trailer. “Welcome back to total drama fanpop. Since we let we gave our campers a challenge and we have a winner who gets the luxury cabin. But first let’s look back to the action that took place when the challenge was give.” Heidi said. The screen goes fuzzy. (If you want to catch all the unpublished action go to the comments)

We had Brownies. Team Drama. Fangilryness.

Sofie:
*confessional*
THESE PEOPLE ARE IDIOTS! I picked a fricken team name, and they act like I'm sitting in the corner silently! I...
continue reading... 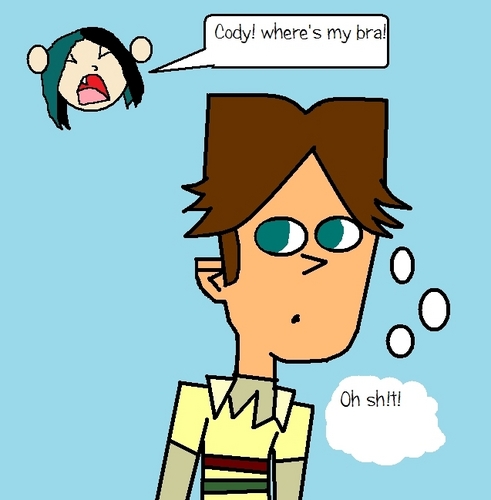