I was sleeping,right after Batman came in and woke me up.
I was sleeping when Batman woke me up saying:
There`s a mission and your late!.
I took litterraly 1 minuto to get dressed and go to MT.Justice.

When I got there it was the Joker on the screen saying:Im having a Girl compettion and I need your girls Batsy,and Wonder woman or The bomb in Central park will go off with a push of a button now don`t make me wait.

Great,first im late now I have to wear a swimsuit or people die.
uy guys,sorry im late umm I overslept.
"Its okay,but a girls compettion? what can he gain from that?"Asked M`gann
Lets just go there and get this over with the sonner we get there the faster were gone.

I put on a Red wine one piece bathing suit,then went to the bioship to go.
when i got there I had no emotion so my hair turned white and then a little girl with red hair was pulling me and saying:You`re my paborito superhero i hope you win!"and left.

Artemis,M`gann,and wonder woman were already there about to start but when I came in the joker told everyone over the microphone:There she is a beauty beyond compare the one the only FireBlaster!!!!!!!.
I looked to see Robin being held back sa pamamagitan ng Kaldu`r,and Superboy,I guess he ticked him off.

Okay the rules are don`t kill each other! muhahahahaa
A huge horn rang and we jumped in the water and we had to get on some floats and bend backwards
Artemis managed to pass through but m`gann did not and Wonder woman could`nt even get on the float.
Luckyly I passed now it was time to climb a pole side ways.A kampanilya rang and it ment that wonder woman was out.
When I reached the tuktok The crouwd went crazy!er.
There was a huge room with a fourway view inside and outside The joker said:Now there are three dummies in there one is Robin,the other two are me!
You have to save one of them and jump into the water and then climb a pole.
Now Start!
I was the First one to get the dummy and but the last one to go to the last part flag catchers M`gann started but failed and took a Major wipeout!Artemis also failed but jumped.
It was my turn I catched the the robin flag and jumped.
I won the compettion and Batman stoped the bomb also arresting the joker.

We were at MT.Justice again Us girls were tired and sat down.Wally would`nt shut up about me beating Artemis,until artemis grabbed a huge cup of frezzing water and pored it down Wally`s shirt.
I could`nt help but laugh at Wally while he screemed like a 6 taon old girl.

Robin came in and sat susunod to me,I put my head in his lap and fell asleep,so we had to stay overnight. 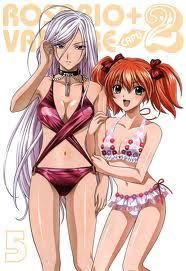 A red haired girl started pulling me.
Codby likes this
Candy77019 lol Wally screaming like a girl is PRICELESS. XD
Denelys yes it is thats why I added it.hahahaha
Skittles98 dead!!
Denelys i know right!
Codby Is that pic from Rosario to Vampire?? 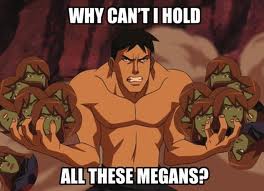 2
All these Megan
added by Kurls_Basd 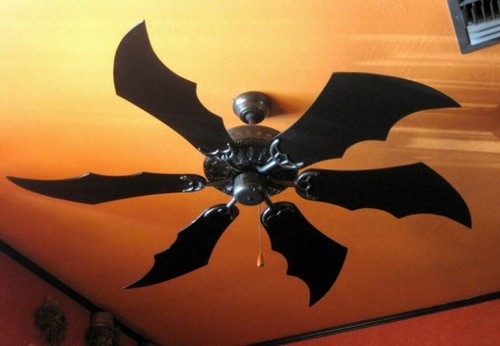 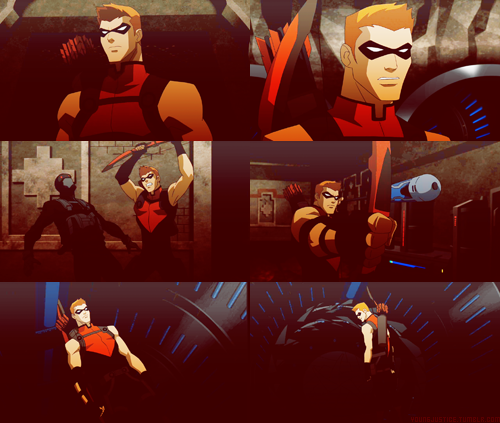 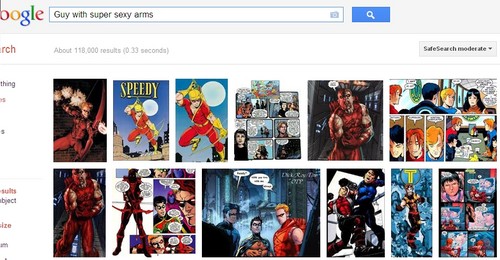 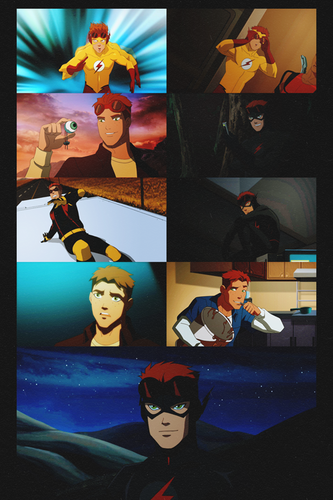 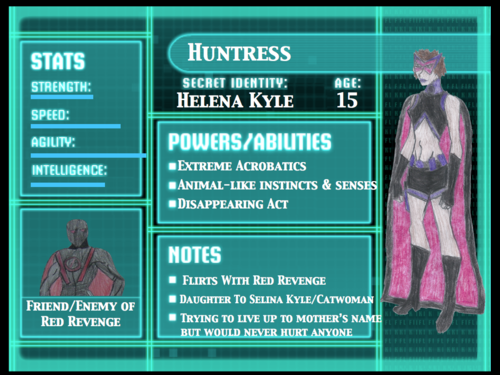 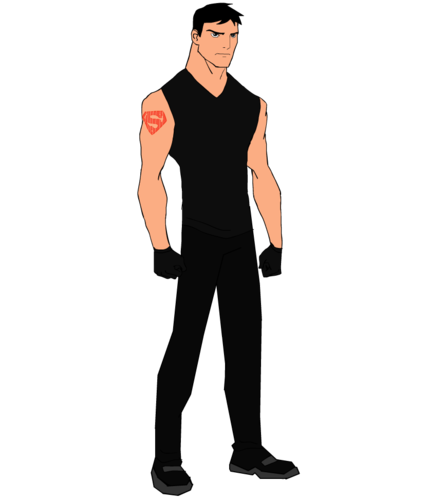 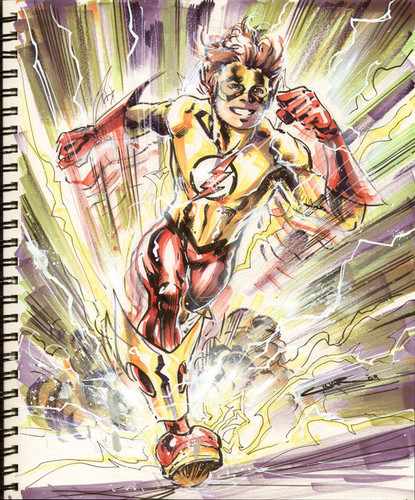 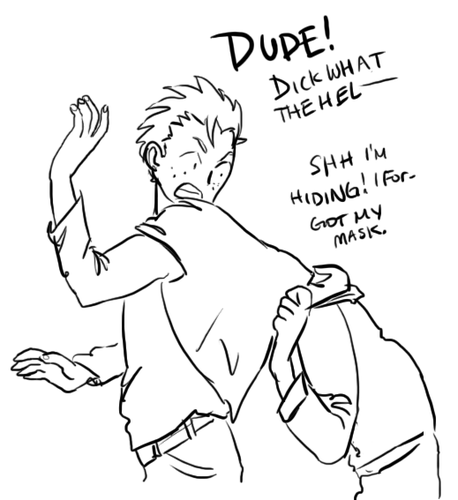 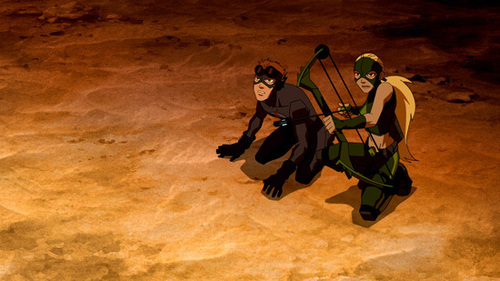 Artemis & Kid Flash
added by AnimeKuLovers
Source: Artemis & Kid Flash
1
A Life That Never Happened
posted by numnumyellow67
Blood trickling down my bruised chin, my sides aching and beaten, I lay among the rubble in the hard metal floor. I can barely see the mess around me, my eyes clouded sa pamamagitan ng the static along with the rest of my glitchy body.

I fixed it, the future is saved, the barren wasteland that I grew up in will never exist, but at a horrible cost that no one will mourn. Erasing one's time means erasing that person's existence along with it, and everything they ever did.

They wouldn't have ever existed at all.

My body was slowly being erased, the process numbing and cold. It's almost like a program you just couldn't...
continue reading...
1
my thoughts on the time jump
posted by brown-eyed-girl
uy just some thoughts about the time jump. So it kinda stinks that we don't see the team grow up and we miss a bunch of stuff. And i heard that there might be another time jump so we will miss madami stuff. Now it does sound cool but sad that we only get bits and pieces of what happened during that time. Many fans want to see what happened in those five years but it would be weird to go back after this season or they might have a cliff hanger in season and then in season three go back the five years so we will have to wait a season before going back were they left off, that requires to much...
continue reading...
Not Hate, but pag-ibig
posted by SB_lover0506
"WALLY!" I scream at the tuktok of my lungs.
"What?!" He asks annoyed.
"Don't 'what' me," I am now enraged.
"Okay, so what if I walked in and you were only in a towel. What are you going to do? Yell at me to death?" His bright red, freckled face is now inches from mine.
"No, Baywatch. Instead your going to listen and understand that you need to wait for a response after you knock. Or at least knock in the first place," I was starting to lose my voice from yelling at him so many times today.
"I did."
"No you didn't."
"Fine, I didn't knock, but I shouldn't have to. If you're Roy's replacement you should...
continue reading...
CRYSTAL NEEDS A REPLACEMENT CHAPTER 1
posted by Julie-alice
'Hey Good morning , can I meet Artemis?'. Crystal asked Artemis's mom.'Artemis, your friend is here'.Her mom calls.

'Hey there'. Artemis called stepping out.'So miss breakfast'. Crystal sinabi holding out a doughnut to her.'Thanks'. Artemis sinabi as she took the doughnut.

'You probly are late today lets walk to school'. Crystal started walking her black shiny braid flying behind her.'Why do you walk with me to school everyday'.Artemis asked.' Because you're my friend silly'.Crystal sinabi as she walked up the school gate.

As they entered Crystal stopped and waved to someone.Artemis saw that she was...
continue reading...
1
New OC. (That i'm really excited about) Marvel/Avenger/DC crossover
posted by SSTitanic
Name: Sade Rogers

Civvies: Red shirt, blue skinny jeans, and converse. Wears a bituin necklace, and a Captain America bracelet in honor of her dad.

Personality: all-around patriot, believing in all of the things that make America great. She always strives to make America even better. She is a very dedicated friend, and has a set group of ideals. She is strictly opposed to any form of oppression, she can be a bit stuck in the...
continue reading...
Bind Faith Part II- Promises??
posted by MikkiDs
As it turns out sa pamamagitan ng the time I did get to the lab my Dad/creator was way past the worried state, and madami into the ticked off, in rage what-the-heck-were-you-thinking and where-have-you-been-do you-realize-what-could-of-happened state.

I tried to roll in unnoticed, you know, nothing’s wrong, haven’t got a care in the world.

The roll never works. As soon as I walk in its “Jozyl Marie Jocoti!”

“What’s up? Do you care to explain this to me?”

He presses a button and the giant computer screen shows a broadcast...
continue reading...
Hope
posted by DeltaYJ
The team sat in silence, a failed mission, civilians dead, unknown people found dead, the only upside that the world was now rid of a few assassins, but even that is horrible. The villain wasn’t even caught! Just a huge explosion killed and allowed an escape. Superboy sat in silence listening to the clock tick remembering the mission

Kaldur flew at the enemy with his swords attempting to push him back.
Superboy, get those doors open! he ordered
I.....am......trying!! Superboy thought as he tried to open the doors
Let me try! Delta insisted and Superboy stepped back even though he was confused,...
continue reading...
1
The Hero Games
posted by Mclovin_69
Everyone in the crowd the sun was covered sa pamamagitan ng clouds in the sky and the araw was dull, Black Canary finally picked up the microphone and began to speak, " Welcome Welcome... the time has come to select three corageous men and woman to contribute to the annual Hero games ", Mohve gasped trying to calm herself as she stood susunod to Steel, Steel looked at her and spoke to her " Mohve its only your first taon that your name is in there...their not going to pick you..." Steel sinabi holding her hand, Black Canary reached in the box on names and pulled out one, " Mohve Slade! " Black Canary said. Mohve...
continue reading...
It Ends at Arkham Asylum part 6
posted by EclipseYJ
The plants tounge latched to her heart, she felt panic as her eye sight went fuzzy. A long dagger came darting across the room hitting the deadly plant, splitting it in half making stickly plant ooz spill everywhere. The familiar mask of Red Revenge hovered over her and scoped her up in his arms, princess style.

"Quick we need to regroup and get out of here, or supey over there is going to bring this whole place down and all of you along with it" Revenge said. Superboy looked up after hearing the word Supey, Megan levitated over to them "Ok I will get everyone of the bioship" She began to levitate off. Phoebe groaned "No megan wait, the x-jet is faster!". Artemis pulled out a smoke palaso and fired it and super man before lucas grabbed her hand and pulled her away. Eclipses eyes turned purple, roulette awoke from her dumapo in Eclipses room "Roulette the blade!". The raven hopped under the kama and flew out again with a silver breif case in her tallons.
Rich Discovery Part 2: Mount Justice
posted by rachele_X
“Ouch! You’re practically ripping my hair out!”
I was seated on the bathroom counter in the cave. Fin, who was still in her civvies, had a fistful of my hair in her hand and was attempting to braid it.
“Sorry,” she replied, slightly exasperated. “It’s just so...thick.” She loosened her grasp, closing her fist around the end of the braid to prevent it from unraveling. “You know, maybe we should just leave your hair down,” she remarked. “It’s just so hard to work with.” I nodded, and she carefully unbraided it. Surveying her work, she smiled. “It actually looks really...
continue reading...
More Cards
456789101112131415161718192021222324