For ten years, Dan put a face to the character of Harry Potter. Out of thousands of boys, he was the Chosen One, so to speak. So, how did this blue-eyed Brit become the face of Harry Potter? An artikulo in a 2002 magazine, Movie Magic (a special edition of Life Story magazine) covered the making of Harry Potter.

The actor told how he has seen his doctor about getting painful cluster headaches which he has suffered for two years.

He said: “You have to be on blood pressure medication and have an ECG every so often.”

An ECG is a test which records the rhythm and electrical activity of your heart.

A Japanese sa ilalim ng daigdig thriller, “Tokyo Vice’s” sales will be launched at Berlin’s European Film Market. It is scheduled to go into production this summer on location in Japan.

Like so many films coming on to the market at Berlin, “Tokyo Vice” is true-event inspired, being based on “Tokyo Vice: An American Reporter on the Police Beat in Japan,” a 2008 memoir sa pamamagitan ng Jake Adelstein that covers his years as the first non-Japanese reporter at one of Japan’s largest newspapers, Yomiuri Shinbun, and his dealings the Japanese criminal syndicate Yakuza.

Daniel Radcliffe is to bituin in a one-off telebisyon film about Grand Theft Auto, in a celebration of the success of the controversial computer game.
Radcliffe, who rose to fame as a child in Harry Potter, will take the role of Sam Houser, the “creative mastermind” behind the game.
The 90-minute drama, to be broadcast on BBC Two, is intended to tell the story of what the corporation calls “arguably the greatest British coding success story since Bletchley Park”.
The programme, entitled Game Changer, will ipakita a group of “British gaming geniuses” as they ilipat from school to creating...
continue reading...
2
dan and erin patong lalaki spotted kissing!!!!
posted by teacupitty43

Daniel Radcliffe and Kill Your Darlings co-star Erin Darke are reportedly a couple in hiding. But though they may have been secretly dating for a while now, their actions this weekend were pretty public. After being spotted halik at Sundance, Erin was later seen rubbing Danny Rad's knee at the Grey gansa bodka Lounge dinner. One pinagmulan swears: "They've been dating for a while but have been debating going public." Hmm… well ibingiay all this evidence… and the fact that ANOTHER eyewitness account reveals they shared outdoor cuddles later in the evening, we're gonna have to believe this one! - See madami at: link

“I used to be self conscious about my height, but then I thought, fuck that, I'm Harry Potter.”
― Daniel Radcliffe

tags: self-esteem, self-image 278 likes like
“Being in Harry Potter is like being in the Mafia. Once you are in, you are never really out.”
― Daniel Radcliffe


“I think honesty is the most heroic quality one can aspire to.”
― Daniel Radcliffe


“I think I'm a tiny bit like Harry 'cos I'd like to have an owl. Yeah, that's the tiny bit, actually.”...
continue reading...
1
Daniel Radcliffe costs Warner Bros serious amounts of Cash!
posted by TheFan10
The “Harry Potter” franchise has raked in billions of dollars for Warner Bros but, it’s going to cost the Hollywood studio some serious cash if they want series bituin Daniel Radcliffe to promote the final film, Harry Potter and the Deathly Hallows, Part 2.

Radcliffe is currently starring in How to Succeed in Business Without Even Trying on Broadway which overlaps with the July premiere of the film.

That means DanRad will be unable to make an appearance at the premiere and won’t be able to make the traditional promotional appearances.

According to the New York Post, it will cost Warner Bros. $500,000 to shut down the theater for week, making Radcliffe available to promote the final film.

Studio execs are understandably furious but at the end of the araw that’s a small price to pay for a film that will easily gross $300 million around the world.
Video Song Coming Soon About 'Daniel Jacob Radcliffe' (Fb.com/DanieljacobRadcliffeFanClub)
posted by irfanraza

Lyrics: C A L L - M E - M R S - R A D C L I F F E
Who would have thought I would be running around a forest, chasing my one true pag-ibig in Ascot today. Daniel, your charm has melted me.

1
Could be possible? Daniel Radcliffe Look In 'Game Changer' (Fb.com/DanielJacobRadcliffeFanClub)
posted by irfanraza

Daniel Radcliffe with some fans At Capetown
Daniel is in cape town for Shooting of game changer!

Daniel found in Black and white Suit with fans!

BBC Two's 90-minute "factual drama" is "conceived for an adult audience," the network sinabi in a statement, and will tell the story of developer Rockstar Games' wildly successful Grand Theft Auto series, set against the backdrop of criticism about its inherent violence.

"But the violent gameplay coupled with its outstanding commercial success leads to fierce opposition," the announcement reads," from parents worried about children immersing themselves in such a violent world; from politicians, alarmed at the values they say it encourages; and above all from moral campaigners, who fight passionately to ban it.

Actor Daniel Radcliffe
With his Marie Osmond biography on several national best seller lists, tagahanga book may-akda Randy Jernigan is moving ahead with publishing his susunod bio. The Life and Career of Ellen DeGeneres has gotten a release petsa in mid December, which has a lot of Ellen fans excited.

The author, a friend and former stringer for me way back when, is a top-notch writer and has been in the celeb business for 25 years, Pagsulat for tagahanga magazines and celebrity weekly's. His material is always spot-on in accuracy and he knows what die-hard fans want to know about their stars so I'm excited about his book series.

The listahan of celebs he's publishing bio's on is impressive, as is the stars he's personally interviewed. After his Ellen book, Randy will be releasing a book on Daniel Radcliffe, then Taylor matulin and Nick Jonas. And from What I hear from Randy's agency, several of these books will also be made into TV movies!

The Woman In Black

'Horns' the Russian premier of the film (December 11th)

orns is a 2013 American-Canadian dark pantasiya thriller film directed sa pamamagitan ng Alexandre Aja, based on Joe Hill's novel of the same name. It stars Daniel Radcliffe as Ig Perrish. Accused of the rape and murder of his girlfriend, he uses newly discovered paranormal abilities in his pursuit to uncover the real killer.

The film had its world premiere at the 2013 Toronto International Film Festival, and is set to have its theatrical release in the United States on 31 October 2014.

It must have been quite a night. Daniel Radcliffe has sent a member of the Dublin minor team €50 for a taxi fare the Hollywood bituin couldn't pay on their famous night out two years ago.

The 25-year-old who was in Dublin filming rom-com 'What If' at the time posted a letter to former Dublin minor centre back Conor Mulally saying: 'Hi guys, So, Thanks again for paying for my cab. I couldn't live with myself if I didn't honour my word and pay you back. Once again great meeting you all. Hopefully this covers it.'

Daniel Radcliffe is a (Handsome) Devil at ‘Horns’ Premiere (Fb.com/DanieljacobRadcliffeFanClub)
posted by irfanraza

No tie, no problem.

Daniel Radcliffe showed ‘em how it’s done on Tuesday night when he stepped out for the red carpet premiere of his film Horns in Paris, France.

The 25-year-old actor, who joined Horns director Alexandre Aja for the event at the Gaumont Marignan theater, smiled for the camera in a grey windowpane suit and black shirt.
In Horns, out Oct. 31 stateside, Radcliffe plays a young man who wakes up after a tipsy night out only to find two horns growing on his forehead. Juno Temple , Heather Graham and Max Minghella also bituin in the dark picture.

The Global Family Reunion, Daniel Radcliffe Already Posted a Picture Behind The Set Of 'The Cripple of Inishmaan..but again Now New Picture As A Cousin..

Moto Of The Global Family Reunion
One World. One Family.
One Extraordinary Event.
YOU ARE INVITED TO
THE GLOBAL FAMILY REUNION
- COMING IN JUNE 2015 -

sumali the Family
+++++++++++++++++
What: An event like no other. The biggest, most inclusive and most fascinating family reunion in history.

Where: The New York Hall of Science, on the grounds of the World’s Fair.

The Cause: Fighting Alzheimer’s disease.
$20 dollar admission will go directly to charity! 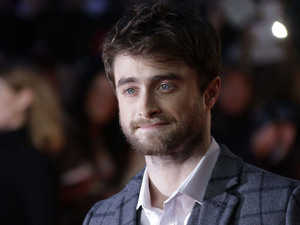 Daniel Radcliffe plays Sam Houser, the British co-founder and president of Rockstar Games, the company behind GTA as well as games such as Max Payne and Red Dead. He is credited with popularizing GTA as one of the gaming world’s biggest franchises but also amping up the violence quotient. 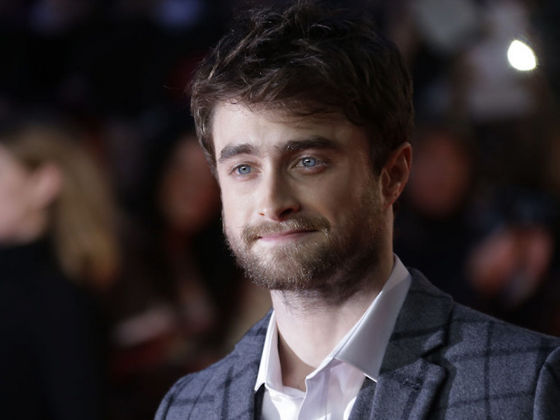 4
ABOUT DANIEL
posted by sini12

Daniel Jacob Radcliffe was born on July 23rd, 1989 to Alan Radcliffe and Marcia Gresham. He began performing in small school productions as a young boy. Soon enough, he landed a role in David Copperfield (1999) (TV), as the young David Copperfield. A couple of years later, he landed a role as Mark Pendel in The Tailor of Panama (2001), the son of Harry and Louisa...
continue reading...
Daniel Radcliffe is Featured in a Book 'What I pag-ibig About Movies'
posted by irfanraza
Daniel Radcliffe is Featured in a Book
(Release: 2nd October 2014 UK)

Link Of the Book Company: link

You Can buy the book From Amazon: link

illustration + movies. Happy days. We reimagined the mind of Quentin Tarrintino to sit comfortably alongside his quote for the book "What I pag-ibig About Movies", with many madami mga panipi from heavyweights like Big Name 'Daniel Radcliffe', Wes Anderson, Tim Burton, Alfonso Cuaron and illustration sa pamamagitan ng Steven Wilson, Andrew Fairclough and Telegramme et al. this book is full of the good stuff. Go buy this book now! 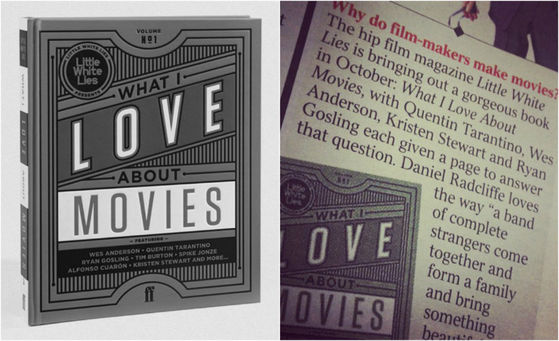 "I pag-ibig Arthur - the original one with Dudley Moore and Liza Minnelli," Daniel told British magazine Now when they asked his favourite rom-com.

"And Get Over It. It was the reason I was in pag-ibig with Kirsten Dunst for most of my teenage years."

It is sinabi now that Daniel Radcliffe has hardly spent any of the Harry Potter money he has right now.
He has made an estimate of £74 million.

Daniel even sinabi "I don't really do anything with my money." "I am very grateful for it,because having money means you don't have to worry about it,which is a very lovely freedom to have."

He may be talking specifically about movie projects, but, no matter what your role in life, he’s right that having some money socked away can afford you a certain amount of freedom and security.
Ben & Brie joins Daniel In His Upcoming Film Brooklyn Bridge (FB.com/DanieljacobRadcliffeFanClub)
posted by irfanraza