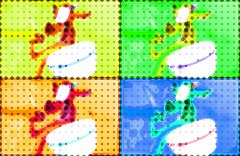 1
Disney Sidekicks
added by cruella
4
My tuktok 10 Disney Sidekicks
posted by cruella
This is a listahan of my ten paborito Disney sidekicks (both good and evil), or groups of sidekicks, and the positive things and negative things about them. Some of the individual ones may have been taken from a group, and some of the groups are left whole. I'm sure your opinion will be different from mine. Actually my idea of who is the best will change from araw to araw sometimes, but these ten are always somewhere at the very tuktok of list. Here are the ten best Disney Sidekicks (in my personal opinion).

5. Pain/Panic (hercules) Positive: funny, work well as a team Negative: works for the villain, can be kind of bumbling

1. Iago (aladdin) Positive: gave up evil ways, hilarious, some what heroic, voiced by Gilbert Gottfried Negative: originally work for the villain, can still be selfish

Seven Dwarfs kingdom hearts
added by BelleRose829
tuktok 10 Reasons Why Terk is Better than Jane
posted by GypsyMarionette
Disclaimer: A listahan I found online. Not mine. Also no offense intended to those who disagree with the list.


10) She doesn't go around in a 200 pound yellow frilly dress and try to sketch mga hayop in the jungle.

9) Terk has her own song, and a fantastic one it is, too!

8) Terk knows that whenever you say "It can't get any worse than this" it always does. She never says that in the movie, does she?

7) Terk is any easy-going girl, no fuss and feathers about her! ("He has no respect for personal boundaries!"-from Jane)

6) Being someone's best friend is better than being their sweetheart any day!

5) I'd rather be a gorilla than look like Jane!

4) Terk doesn't go around in a palda with a thigh-high slit in it.

3) Terk has an unmanagable name- Terkina- but she can get a cool nickname out of it!

2) Terk is a tomboy, better than a prissy little British girl fresh out of 'Finishing School'