7
You are a wise man, Mr Knoxville.
posted by misanthrope86 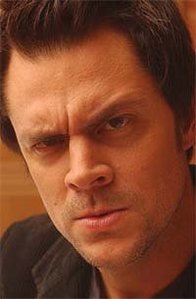 Over the years, Johnny Knoxville has uttered some weird and wonderful things. Here is a collection of bizarre mga panipi from the hilariously wise man.


"I never puke ever, and I really almost puked then."


Scott Potasnik: "You guys are gonna hate me an oras from now."
Johnny Knoxville: "We hate you already."


[after taking a fall] "My head stopped my body from getting really hurt on that."


"I have a full grown, semi-nude man bound with duct tape in my truck and I was trying to get out to the desert to bury him. How do I get to...
continue reading...
6
mga litrato of Johnny in hospital... Again...
posted by misanthrope86
I tried to post this as a link but it wasn't working!

Anyway, if you are on MySpace, check out link

There are some mga litrato of Mr Knoxville recovering in hospital after nearly losing his scrotum. In case you haven't heard, Johnny was attempting a jump on a bike for the susunod installment of "Jackass". As usual, the stunt went wrong and Johnny nearly Nawawala his family jewels.

Check out the footage of the ball-busting incident at
link
Its's not graphic or gross. It just shows Johnny driving along, flying up in the air, falling of the bike, and the bike landing on him.

Thats our Johnny. Always putting his testicles in harms way just for out amusement.
More Cards
1234567891011