Arthur and Gwen Re-watching Merlin 1x12 - "To Kill The King"

Hello guys! Apologies that this post is late. I was busy with Easter! I hope everyone who celebrates Easter had a happy one.

Now onto the discussion for To Kill The King. I'll be honest, I haven't watched it yet. I haven't caught up yet, still have to watch from 1x04 on-wards. Sorry about that. For some reason, I'm finding it hard to motivate myself to re-watch it after Julian Murphy's comments in the final episode commentary. But I promise I will catch up this week!

Anyway, on to the questions for the discussion. Use the headings, but as always you don't have to use the questions under each heading. They are there just to inspire you. You can discuss anything you want about the episode.

What I liked about the episode:

Feel free to discuss anything you want under each heading. You can talk about any plot holes or things that could have been added to improve the episode.

Some questions to ask yourself to help you answer the headings...

+ What were you thoughts on Tom's willingness to help Tauren? Do you think he was selfish to help him knowing that he might get into trouble or was he too concerned with providing a good life for Gwen?

+ Your thoughts on the progression of the plot. Did you feel disappointed when the focus of the episode shifted to Morgana and her plans in getting revenge on Uther?

+ Did you think Morgana's concern for Gwen and her situation was genuine? Or that it was genuine at the beginning until it became more about what happened to her father and Uther's role in it?

+ Did you think that Arthur could have done more to help Gwen's father seeing as it was clear he did not agree with his father's judgement?

+ What were your thoughts regarding the Arwen scene in this episode? Did you feel any hints to their future relationship?

+ Obviously we know that Gwen will become Queen later on in the series, did you feel any moments when you felt that Gwen had infinite wisdom? 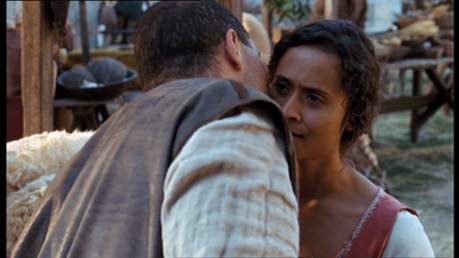 sa loob ng isang taon na ang nakalipas HumbleQueen said…
I just finished watching. Let me say, Millie, those were some good questions getting right to the heart of how I feel about this episode. I both liked it and disliked it.

I liked the affection between father and daughter and the affection between Morgana and Gwen. But yes, I do think Tom was selfish in his actions and may I say also that he was very unwise. He really did a disservice to his daughter rather than making life better for her. Most of the pain she felt was of his own doing. And about Morgana, I do think she was genuine at first, as she often was about those who suffered at Uther's hands, but yes, I do agree that I think she lost sight of that and it became more about her situation.

Arthur was clearly torn. And yes, there was a sense of something in the air when he came to Gwen after her father's death. He felt something that he didn't understand himself, nor did she. But it was there and I do think we were given a hint of that which was to come.

I had forgotten that it was Gwen words that caused Merlin to do the right thing. I had forgotten about that scene and it was the Gwen that we saw grow to be a woman worthy of being queen that said those words of infinite wisdom. She was a far better voice of wisdom than Zilgarrah ever was.

I don't however think Arthur should have done more. He wasn't at that point in his development yet. Especially regarding Gwen, but it's pretty obvious he felt something. Especially when Tom was first arrested and the way Arthur stood there with his head down during the discussion with his father and Morgana. It reminded me a bit of his countenance when Gwen herself was arrested. I think he had something for this girl for a LONG time. It was just buried deep down. Which, btw, I think she reached deep down and pulled it out in the bedside scene next episode. More about that next week.

I do want to say one thing that I always disliked about this one. I don't like the scene where Gwen ran out to the cart when her father was killed. I don't like the way it was done and acted. I think this was Angel's most poorly done scene of the whole five years. It was too underdone. I didn't like the way she was the whole rest of the episode after the death really. I think I blame the directing in that aspect. She should have shown way more emotion considering the relationship she had with her father or else been in more of a shock, like in a stupor or the like. Just always been a sore point with me.

Not my favorite episode; lots of flaws for me. And I just wasn't into the whole Uther/Morgana thing AT ALL. I did empathize with Merlin, but for the life of me it escaped me why he didn't say anything to Gaius. I think maybe I missed something there.

MISAforever commented…
I like what you sad about Gwen's act when her father was killed. I agree with that. She was left aside and we didn't see the real struggle she should had been going through.. sa loob ng isang taon na ang nakalipas

ellarose88 commented…
Oh i'm glad that my tanong stimulated such thoughts! I really will catch up and respond to your thoughts later! sa loob ng isang taon na ang nakalipas

Have to go out for awhile and I'll post episode 13 a little later. Hope ya'll having a nice day!

+Tom was acting like a man hungry for more power, more money. It is in human nature, but it is a flaw. Maybe his intentions were good ones, to improve his daughter's life, to give her something better, something more. But it was a wrong thing to do and he knew it. And that made him guilty; at least that's the way I see it. He should have been a good example to her, he should have shown her that family overvalues money. And he failed. I guess that necessarily doesn't make him a bad father, but it is not a quality of a good one. We didn't get to know his chracter well, so I cannot say was he acting OOC, but I expected more from Guinevere's father!


+I definitely didn't think the episode will focus on Morgana and her relationship with Uther. I wouldn't say I was disappointed, but I kind of was. I hoped it will focus more on Gwen and her feelings, and maybe some more Arthur. But now when I look at it, it was actually quite nice to see Morgana having complex feelings. To see her still torn between good and evil. And to see there is good in her heart. I wish she remained more like that. Instead she became a really bad villian.


+Morgana really cared about Gwen and doing the right. And in this episode, those two things were combined. I really believe her concern was genuine but it became so much more than that. I think when Morgana saw what Uther did, she was fed up with it all; his tiranny and stubbornness. And I cannot say I blame her. She was in the first row to see the evil he was doing. And she wanted to stop it. I understand that. At point she wasn't fueled with her own desire to have such power, she simply wanted to do the right thing, to stop the evil. Her mistake was the path she chose to take, the wrong one. The one that could only bring more pain and suffering. And in that she stayed consistent. She also saw the man Arthur was and she didn't blame him for his father's actions ( Thank you. You're a better man than your father. Always were.). She was so much real in the first season.

+I really liked when Uther admitted he was wrong to kill Tom. It was one of the really rare moments when Uther showed his human side. Unfortunately, he was too late. However, I don't think it would change his mind. He was cruel and I don't think his main goal was doing the right thing. It was to protect his principles, to protect his kingdom from magic. He didn't see reason because he didn't want to. Not because he didn't see it.

+ What were your thoughts regarding the Arwen scene in this episode? Did you feel any hints to their future relationship?
There were definitely Arwen hints, but I see them everywhere! When he came to see her, the way he spoke to her gave him away. He felt remorse, yes. But there was something more in that. He wanted to make her feel better, safe. Not just console her. His words caught her off guard, he pleasantly surprised her. I think both of them felt something more, but neither were ready to admit.


+Gwen gave away her infinte wisdom through all first season, and in some moments it was clear as a day. Like in this one when her simple words made Merlin realise he was about to make a grave mistake! She didn't have to do anything special, or make some big speech. She simply had to be herself and that was enough to be great. What better making of the Queen!

sa loob ng isang taon na ang nakalipas sportyshuie said…
Guys... I'm so sorry I haven't been around for the last two weeks ... Been terribly busy with work. Well, it's over this week so I guess ill start chipping in here and there ... Missed so much. Hope you guys aren't mad that you didn't hear from me. Sorry.

MISAforever commented…
Mad? Never!! You just take your time and catch up when you can! xxoo Miss you too! sa loob ng isang taon na ang nakalipas
Something to say? Sign in with one of these options:
Log in to Fanpop! Not yet registered? Create a new Fanpop account!