+ What did you think of the feelings that were showed between Gwen and Lancelot? Do you think that the events of the episode had bearings on how Gwen responded to Lancelot's advances? Or were they genuine?

+ What did you think of the bandits plan to have Gwen impersonate Morgana? Especially considering that Uther wouldn't try and save a servant.

+ What were your thoughts when Gwen saw Arthur (and Merlin) appear to save her and Lancelot? Do you think that her heart had already chosen Arthur, seeing as he got very upset when Arthur said he only came because Morgana begged him to?

+ How did you feel about Arthur/Merlin friendship in this episode? Did you like how Arthur opened up to Merlin about his feelings for Gwen?

hapybeinginsane commented…
I have loads of time at the mo, so I'm definitely going to have a go at this as soon as I can get ahold of the episode (if that's okay with all the mods and everyone - I've never done this before!) Thankyou for organising everything ellarose88! sa loob ng isang taon na ang nakalipas

sa loob ng isang taon na ang nakalipas MISAforever said…
+ Best moment(s):
I think that'd be in the woods, when they resucued them, and Arthur said he only came because Morgana begged him. The look they exchanged spoke so much instead of the unspoken words. He was so obviously hurt by the whole situation and he lied and she so right through him. I loved that little moment. It was like they, for a second there, actually acknowledged the whole situation.
I also loved Arthur's opening up to Merlin, but I'll get to that later.


+ Worst moment(s):
Shallow me here, Lancelot and Guinevere's kiss ( that I still pretend never happened). It was all out of the place. I was still new to the show when I watched this episode, and still not completely dedicated to Arwen, but I felt like all about them was so forced and fake and awkward..


+ Favourite quote(s):
Morgana: How can you be so heartless? Gwen is the most kind, loyal person you'd ever meet and she's been more than a friend to all of us, and you would leave her at the mercy of those animals?


+ Your thoughts on the villain of the week:
Hengist? He was, well disgusting! I didn't like him at all, so I guess he did his part well!


+ Best character development:
Not sure about this one. I think I'll go with Arthur, cause he once more defied his father and followed his heart. That is always a development for Arthur.
Also Gwen, cause there was so much more of her than in the prevoius episodes. We saw more of her brave side, but also the vulnerable one. She was so confused and scared. Angel played it brilliantly as always.


+ Best duo development:
I'd say Merlin and Arthur. They really acted like best friends, with Arthur confiding in him and opening up.


+ Your thoughts on the Arthur/Gwen/Lancelot triangle:
I think you all know I am not a fan of it. XD Arthur and Gwen's relationship was slow and still in the beginning. They were nowhere, feelings clearly there but also all the obstacles. And we saw a hint of Lancelot and Gwen in season 1, but it was even less than a hint. I never saw they had mutual feelings, maybe some sort of liking it each other, but I wouldn't even call it a crush. At least not from Gwen's point of view. And when she saw him here, it sort of implied she once loved him and still does. Which didn't make any sense. I think that she was awfully scared and confused and thought she was going to die. Then she saw a friendly face, someone who clearly had feelings for her. It was hope in a hopless time and she hang to it. I don't think it was love. I know it wasn't; not a chance. She liked someone else, who was unattainable for her. And there was Lancelot, who was very much available. What convinced me the most about what I am saying, is the fact she ran away for her life when he gave her a chance and didn't look back for him, didn't wait for him. You don't do that to someone you have feelings for!


+ Your thoughts on the plot progression and conclusion:
I liked it. It had everything. It was consistent, and it involved everyone: Uther being ruthless, Morgana really caring about Gwen, Arthur and Merlin, Arthur and Gwen and the others!

+ What did you think of the feelings that were showed between Gwen and Lancelot? Do you think that the events of the episode had bearings on how Gwen responded to Lancelot's advances? Or were they genuine?
I think I already answered this one. I wouldn't say they weren't genuine. Gwen is such a good person and she cares about everyone. So she did like him, but as a friend and a hope for a new day. And in those circumstances it was a lot. But once more, it was not love.


+ What were your thoughts when Gwen saw Arthur (and Merlin) appear to save her and Lancelot? Do you think that her heart had already chosen Arthur, seeing as he got very upset when Arthur said he only came because Morgana begged him to?
I don't think Gwen dared to hope Arthur would come for her. It would hurt to much to hope and to not see him come. And when she saw him, she saw the look on his face when he realised what was going on. And to see him hurt, she was hurt as well. That also showed she loved him, even though she was not ready to fully admit that to herself. She knew when he lied about the reason he came, but it still hurt her. It was a very complex situation. She hurt Arthur and she loved him, and she gave Lancelot a hope, and she didn't love him.


+ How did you feel about Arthur/Merlin friendship in this episode? Did you like how Arthur opened up to Merlin about his feelings for Gwen?
I absoutely loved it. It is one of the reasons why I love this episode. His speech is something I know by heart and I will always know. It was so honest and vulnerable and so unlike Arthur and yet it was his very soul that talked. It was so beautiful. 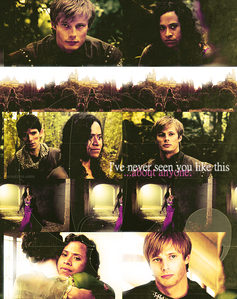 ellarose88 commented…
I totally agree with you Joppa about Lancelot and Gwen. That was the worst halik ever. You can tell A/G were gonna be end!game as their kisses you can see and always are bright and filled with light. I've never believed that Gwen was in pag-ibig with Lancelot as they never spent the time together for their feelings to grow. And even if they did, I believe that Gwen would choose Arthur over Lancelot anyway for many reasons. But yeah, I totally agree with you on so many great points you made! sa loob ng isang taon na ang nakalipas

HumbleQueen commented…
I'll read all this after I watch. I have been out of commission again but pan to watch ep. 5 tonight as I'm up next! sa loob ng isang taon na ang nakalipas

sa loob ng isang taon na ang nakalipas HumbleQueen said…
THIS IS ALL ABOUT ARTHUR AND GUINEVERE, NOT LANCELOT AND GUINEVERE!!!!!! Ok. Got that off my chest. Going to watch episode 5 as it's my turn. I'll post it tomorrow. I may not have much time to comment on the last two as I've been off with family life, etc. Back for a while now.

sa loob ng isang taon na ang nakalipas sportyshuie said…
I havent watched it yet ... Im so let behind, sorry guys. Promise will do so soon as im checking the physio becuase of my recurring back pain. Been feeling tired lately ... But will do soon .. Promise.

sa loob ng isang taon na ang nakalipas sportyshuie said…
+ Best moment(s):
Everything that had arwen in it and please forgive me folks ... lancelot! (please dont throw potatoes at me). I love lancelot in this series because he was portrayed as noble and loyal to Merlin. Yup, i am sure everyone is expecting me to say Arthur but i really love the friendship lancelot and merlin shares.
But the best of the crop moment is the time where Arthur says he came because morgana begged him and the look Gwen gives him. PHEWWIT!!

+ Your thoughts on the villain of the week:
All right in my opinion .. seems to serve the purpose. But if it wasnt for him Arthur and Gwen wouldnt have united ...

+ Best character development:
Lancelot because we see his development after he left Camelot. I know this will not go well with alot of you but i really liked the way Lancelot was developed in the series, minus the shade of course.

+ Best duo development:
Lancelot and Merlin's friendship. I simply adore these two and love how Lancelot feels free to confide in Merlin and listens to him. And Merlin, knowing Lancelot's love for Gwen respects that.

+ Your thoughts on the Arthur/Gwen/Lancelot triangle:
Nicely done. Better than the thrash we were exposed to in the books.

+ How did you feel about Arthur/Merlin friendship in this episode? Did you like how Arthur opened up to Merlin about his feelings for Gwen?
Progressive. I like how Arthur trusts Merlin to confide his feelings for Gwen. That really goes to show that ARthur sees Merlin first as a friend and then as his servant. It was definately a start to the wonderful and respectful friendship both has.

+ What were your thoughts when Gwen saw Arthur (and Merlin) appear to save her and Lancelot? Do you think that her heart had already chosen Arthur, seeing as he got very upset when Arthur said he only came because Morgana begged him to?
I think Gwen was really confused. She loved Arthur, no doubts about that but she didnt dare to hope because of their social status and at the same time she didnt expect to meet Lancelot and knowing that her end was close, she gave him hope because she didnt think Arthur would come for her. And when Arthur did, i think she has already decided whom she loved. Her tears for Lancelot at the end was probably because she wasnt able to thank him and tell him the truth not because she loves him.
This is what i think.

sportyshuie commented…
Lol ..thanks mille ... sa loob ng isang taon na ang nakalipas
Something to say? Sign in with one of these options:
Log in to Fanpop! Not yet registered? Create a new Fanpop account!